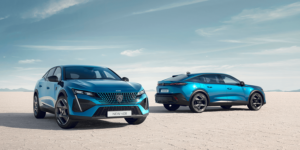 Peugeot has presented a new model, the 408. The hatchback sedan with SUV elements will initially be launched in early 2023 with two plug-in hybrid drives, among others. A fully electric version is to follow a few months later.

Officially, Peugeot speaks of a model with a “fastback silhouette in the C segment”. Basically, the 408 is a crossover between a saloon and an SUV: a hatchback saloon (with the slightly raised fastback rear) has been raised slightly in SUV style and fitted with SUV-like plastic cladding on the wheel arches.

In doing so, Peugeot is following a similar concept to sister brand Citroën with the C5 X launched in 2021 – only Citroën has taken a sort of estate car and raised it a little. At 4.80 metres, the C5 X is also slightly longer than the Peugeot 408 (4.69 metres), but the wheelbase is the same for both models at 2.79 metres. The boot capacity of 536-1,611 litres (Peugeot) and 545-1,640 litres (Citroen) also differs only slightly between the two models.

This is hardly surprising, since both vehicles are based on the EMP2 platform. This means that they also have the same powertrains. In addition to a pure combustion engine, the Peugeot will have two plug-in hybrids, each with a system output of 132 or 165 kW. Peugeot does not give any further details on the powertrains in the announcement. The announcement that an all-electric version will follow “a few months later” also does not mention any technical data.

In the case of the PHEV, the key data are known from other models – such as the Peugeot 308 on the same platform. In the version with 165 kW system output, the combustion engine produces 133 kW, the electric motor 81 kW. The electric top speed is 135 km/h. If the familiar 12.4 kWh battery is retained, the pure electric range should be more than 50 kilometres. Peugeot also does not give any information about the charging system, other EMP2-PHEVs are equipped with a 3.7 kW charger ex works, 7.4 kW are optionally available.

Peugeot has not yet announced prices for the model, which will happen before the market launch in early 2023. For comparison, Citroen has priced the C5 X’s 165 kW PHEV at €44,980. Since Peugeot states that the 408 will be positioned at the upper end of the C-segment, this price range seems realistic.

For Europe, the 408 will be built in Mulhouse, France, followed later by production in Chengdu for the Chinese market.

VW to present Chinese version of the ID. Aero in June