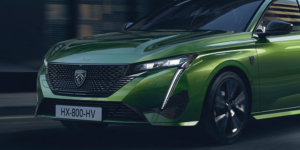 Although the announced Peugeot e-308 will not be on the market until next year, there are now first reports on the technical data of the compact electric car. These differ slightly from the known data – probably also for the sister model Opel Astra-e.

It was already known that Peugeot is planning a purely electric version of its new 308. Now the British magazine Autocar revealed new details: according to them, the Peugeot e-308 will go into production in July 2023 and is to be delivered shortly thereafter. The SW estate version will also be offered as a pure electric vehicle.

Regarding the technology: According to the reports, the Peugeot e-308 will only be available as a front-wheel-drive car, so there will be no change to the well-known electric cars based on the e-CMP or EMP2. The electric motor, however, increases from 100 kW to 114 kW, according to Autocar, the maximum torque is supposed to increase by ten Nm to 270 Nm. Instead of the well-known 50 kWh (of which about 45 kWh are usable), a 54 kWh battery is to be installed in the e-308. According to the reports, the net usable value is 50 kWh, which is about five kilowatt-hours more than before. The battery pack has the same dimensions as before, a new NMC811 battery chemistry ensures a higher energy density.

The powertrain, together with aerodynamic tweaks and the new heat pump recently introduced in the e-CMP models, is said to be more efficient – consumption is still quoted at 12.4 kWh/100km – making a WLTP range of almost 400 kilometres possible.

According to both reports, there is no change in the charging capacity. This is to remain at 100 kW, the standard charging process from ten to 80 percent at a suitable fast-charging station is to take about 30 minutes. With the 11 kW AC charger, the battery will be fully charged in about five hours.

There will probably be no changes to the design – at least not on a large scale. The e-308 will be similar to the PHEV model already on sale. A closed front, as Hyundai does with the Kona electric, is not planned. The e-308 is also said to be almost the same as the plug-in hybrid in terms of load space and weight.

The data reported but not confirmed by Stellantis are of course also interesting for other brands. For example, the Opel Astra-e and the DS4 E-Tense – both built in Rüsselsheim, Germany – will probably also be equipped with this new version of the BEV drive. It is not known whether the existing models from the e-CMP-based small cars to the EMP2 minibuses will also soon receive the improved drive.