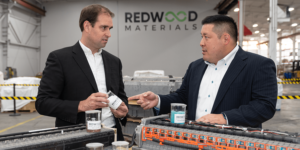 The recycling start-up Redwood Materials, founded by former Tesla CTO JB Straubel, has gained another major partner from the automotive industry. Toyota Motor North America and Redwood will collaborate on the collection, reprocessing, recycling and supply of battery materials for electric car batteries.

Toyota and Redwood have said want to create “a truly closed-loop solution for batteries”. Since Toyota does not currently have a battery-electric car on the market in North America (and consequently there are no used BEV batteries available for recycling), Redwood says they will initially “focus on testing and recycling Toyota batteries, creating end-of-life pathways for the original hybrid electric vehicles.” This means that mainly Prius batteries will be processed before the first BEV batteries reach a state that they are suitable for recycling in a few years’ time.

Later, the cooperation is to be extended to other areas, such as the state-of-health screening of batteries, data management, but also the supply of battery materials. Redwood had announced in September 2021 that it would expand its activities beyond pure recycling and also want to produce battery materials itself on a large scale from recycled materials. The first customer for copper foils made from recycled materials is Panasonic with its production in Gigafactory 1 for Tesla.

Redwood will carry out the work on its battery campus in northern Nevada – the state borders directly on California, where the Prius sold very well for several years. But in the future, Redwood says it also plans to have facilities near “many of our other partners on the East Coast” and an operation “near Toyota’s recently announced North American battery plant.” This is likely to be the North Carolina project announced by Toyota Motor North America in 2021.

“We are excited to be working with Redwood Materials to identify solutions for our electrified powertrains at the end-of-life that contributes to our vision of creating a sustainable, circular battery ecosystem,” said Christopher Yang, group vice president of business development at Toyota. “We are committed to developing sustainable solutions that allow our batteries to provide value beyond the initial lifecycle in an electrified vehicle.”