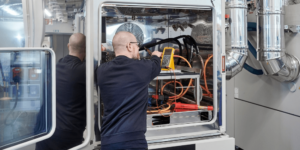 Traton subsidiary Scania has commissioned a new battery laboratory at its research and development facilities in Södertälje, Sweden. The facility consists of three 250 m² test halls for battery cells, modules and packs.

Scania had announced the battery lab in November 2020 in parallel with the battery assembly plant, also located in Södertälje. “With a battery factory close to our assembly line almost in place, and a test track optimised for electric and autonomous vehicles on its way, a battery lab at our Research & Development facility was on the wish list. And now it is a reality,” Scania now wrote.

The facility, which covers a total of 1,000 square metres, comprises the three test halls mentioned at the beginning. For safety reasons, each of the halls is a separate, structurally separated fire section. Adjacent to the halls is an area where test samples can be prepared. “The purpose of the lab is to test battery cells, as well as modules, and packs,” says Scania project manager Lisa Forsell. “We look at our customers’ needs, and apply the modular mindset that runs through all of our operations to make the most cost efficient solution.”

The lab focuses mainly on evaluating battery performance and life in a range of climates from -40 to 70 degrees Celsius. In doing so, the test engineers determine the best operating conditions for the battery in terms of temperature set point, state of charge window and charge performance profile. This is to optimise the service life and at the same time take into account the customer’s requirements for the vehicle.

The expansion of the test capacities became necessary not only with the increasing demand for electric trucks, but is also due to the fact that long-term tests simply take time. “A lifespan test takes two years. It is the equivalent to seven years on the road,” says Håkan Örnhed, Head of Test Cell Operation Battery/E-Components. “We also have this enormous chamber where we can put a whole power train, if we want to. If we use that instead of real-life winter tests, we save a lot of money.”

The test equipment is from Keysight, not only is the hardware testing carried out with it, Keysight also supplies the software to control the test benches and to program and monitor battery tests. “Not only does our collaboration with Scania increase our visibility in the e-mobility world. We also gain insight from a world-leading transportation manufacturer that’s discovering new edges of e-mobility technology,” says Thomas Goetzl, vice president of automotive and energy solutions at Keysight.