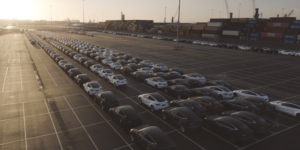 Tesla produced 258,580 vehicles and delivered 254,695 in the second quarter. This is significantly less than in the record quarter Q1/2022, which is due to the ongoing problems with the supply chains and the temporary closures of the Shanghai plant.

For the first quarter of the year, Tesla had built 305,407 vehicles and delivered 310,048 electric cars from the beginning of January to the end of March. In view of the weeks of production downtime at Giga Shanghai, the decline of 55,353 vehicles delivered has remained manageable. In Fremont, production went through without any major supply chain problems, and the Q2 figures also include Model Y from the Texas Gigafactory for the first time – the first vehicles from Grünheide had already been delivered at the end of the first quarter.

Broken down by model series, Tesla built 16,411 Model S/X in Q2 and handed over 16,162 units to customers. With this, Tesla was even able to surpass the result from the record Q1, when 14,724 Model S and Model X were listed in the statistics. The two models have not yet been delivered internationally again since the refresh.

Consequently, the Model 3 and Model Y accounted for 242,169 vehicles built and 238,522 delivered. This is the full impact of the production shutdowns in China. This will also have consequences for the registration figures in Europe, which will be published in the coming days: The usual delivery boom in the last month of a quarter turned out to be much smaller in Q2, with fewer ships on their way from Asia to Europe.

But things are apparently picking up again: in June 2022, Tesla built more vehicles than in any previous month. Tesla did not give an exact figure for the monthly record in its usual brief stock exchange release on the production and delivery figures for a month. However, there were indications: the plant in Fremont is running at full capacity, Shanghai is approaching the current maximum of 14,000 vehicles per week (in July, conversions to 22,000 vehicles per week are planned) and in Texas, “thousands” of Model Ys are already being built per week. Giga Berlin also set a new weekly record in June, and a night shift is to be introduced from the beginning of July.

Tesla does not give an outlook on the third quarter with the record production in June in the press release; that will probably only happen when the business figures for the second quarter are announced. Tesla has scheduled this for 20 July after the close of the US stock market.