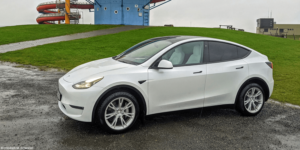 Tesla delivered 310,048 electric cars in the first three months of the year, more than in any previous quarter. Production fell minimally from the fourth quarter of 2021 to 305,407 vehicles. But the second quarter is starting off with difficulties.

Let’s first look at the figures for the first quarter: of the 310,048 deliveries, 295,324 units were accounted for by the Model 3 and Model Y, and 14,724 by the Model S and Model X. The latter two models have not yet been delivered internationally since the refresh.

Tesla produced 291,189 Model 3 and Model Y and 14,218 Model S and Model X in the first three months of the year. This means that there was a large backlog from the fourth quarter, especially for the two smaller model series – in addition, the important factory in Shanghai was closed for several days in March due to the Corona lockdown there. As a result, production in the first quarter fell a few units short of Q4 2021: 305,840 Teslas were built then, compared to 305,407 vehicles in the opening quarter. Without the lockdown in Shanghai, Tesla would probably have achieved a new record quarter in terms of production.

Nevertheless, Tesla is on track with over 300,000 vehicles built and delivered in Q1. By comparison, Q1 2021 saw only 184,800 deliveries. In addition, expansion work is underway in Shanghai and the two new gigafactories in Austin and Grünheide will also ensure further growth in production and consequently deliveries in the course of the year.

Tesla does not provide a forecast for the current year in its usual brief announcements on production and delivery figures. On 20 April, Tesla will present its financial figures for the first quarter after the close of the stock exchange, where a statement on the further course of the year can be expected.

However, the second quarter begins with difficulties for Tesla: The pandemic-related production pause in Shanghai continues. Originally, as reported, the interruption was supposed to last from Monday morning to Friday morning last week, but was then extended to include Friday and Saturday and later also (at least) Monday of this week.

What impact this will have on production and delivery figures can only be roughly quantified at present. Based on the production figures for February (at that time still without the Covid 19-related interruption), Tesla can currently build around 2,000 cars per day in Shanghai.