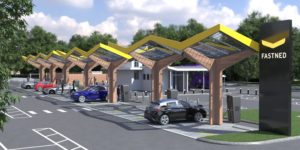 In the English city of Oxford, Pivot Power, Fastned, Tesla and Wenea have commissioned the Energy Superhub Oxford, which enables the simultaneous charging of 42 electric cars. Other HPC hubs from Pivot Power are to follow.

At Oxford’s new ‘Energy Superhub’ there is a buffer battery to cushion the impact of the fast charging processes on the power grid. The initial constellation of chargers are ten HPC chargers from Fastned with 300 kW each, twelve Superchargers from Tesla with 250 kW and 20 AC chargers from Wenea with 7 to 22 kW.

Tesla has ten stalls of the V3 Supercharger, as the 250 kW charging capacity already reveals. In the case of Fastned, the ten HPC charging points are distributed over five Alpitronic Hypercharger HYC300s, which are covered with the Fastned-typical solar roof. This means that five electric vehicles can be charged with up to 300 kW, and if both charging points of a column are occupied, the power is divided.

⚡ Europe’s most powerful #ElectricVehicle charging hub has arrived in Oxford! ⚡

In the current expansion stage, with 42 charging points, the Energy Superhub has only reached about one-tenth of its maximum possible size. The site can be expanded to 400 charging points, and the grid connection is designed for 10 MW. This power comes from an underground cable directly connecting the hub to National Grid’s high voltage transmission networks with an underground cable.

The infrastructure for the hub – at least accessing electricity from high-voltage networks – is also being accessed by public service vehicles. One substation has been installed at Oxford Bus Company’s Watlington road depot. The public transport company plans to introduce over 100 electric buses over the next two years.

The Energy Superhub Oxford says it has also supported the electrification of the Oxford City Council fleet, contributing almost £900,000 towards the procurement of 40 EVs, including cars, vans, road sweepers, tipper trucks and an all-electric bin lorry. How and whether these vehicles are charged at the ‘Superhub’ was not further mentioned in the announcement; certainly, charging power of 300kW is sufficient for larger electric vehicles, providing the physical space and clearance are provided for them to charge. The Energy Superhub Oxford website talkes of simultaneous charging for 42 “electric vehicles”, however, it may be that this term is being used to describe electric cars and does not reflect mixed use with larger vehicles.

Pivot Power plans to build up to 40 such Energy Superhubs across the UK, with the next two projects already underway in Coventry and Sandwell in northwest Birmingham. The plans for the 40 hubs were first announced back in 2018.