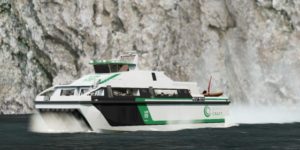 The Norwegian company Teco 2030 is leading a consortium with partners Umoe Mandal and Blom Maritime to develop a hydrogen-powered high-speed ship with the help of government funding of 5 million kroner (just under 500,000 euros).

The H2 ship will carry 200 to 300 passengers at speeds of more than 35 knots (65 km/h) and be able to travel longer distances. The partners plan to have their solutions developed and approved in 2022 and 2023. In the next phase, a supplier will be selected to build the newly developed ship. Trial operation is planned for 2025.

The ship is to use a fuel cell system from Teco 2030, which will be built into an energy-efficient catamaran design with SES technology from Umoe Mandal. SES in this case means “Surface Effect Ship”. Umoe Mandal has already built several surface effect ships for the Norwegian Navy but this will be their first propelled by hydrogen fuel cells.

“We are humbled and proud to be qualified to develop the high-speed ship of the future, powered by hydrogen and Teco 2030 fuel cells,” says Teco CEO Tore Enger. “This demonstrates our ability to lead advanced ship developments and design either retrofits or newbuilds through our maritime expertise.”

“Umoe Mandal has more than 30 years of experience in delivering light and energy-efficient ships based on SES technology. This includes the world’s fastest combat ship, the Skjold-class corvette and the Wavecraft CTV series for the offshore wind market,” says Tom Harald Svennevig, CEO of Umoe Mandal. “We are excited about this opportunity to develop and approve a hydrogen-powered zero-emission version of our vessels”

Teco 2030 is building Norway’s first “gigafactory” for fuel cells to be used in ships in Narvik in northern Norway. The fuel cell factory, which should start operations this year, will be accompanied by a deveopment centre. The EU has upped its green hydrogen targets in the light of the current European energy crisis, while the EU Council recently targeted the marine sector to reduce CO2 limits. The Council agreed to include the maritime shipping sector in the EU ETS (Emissions Trading Scheme). Generally, this consists of the gradual surrendering of allowances for shipping companies.