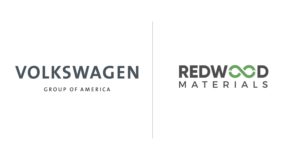 Volkswagen Group of America has entered into a wide-ranging collaboration with recycling start-up Redwood Materials, founded by former Tesla CTO JB Straubel, to establish a supply chain for recycling electric car batteries in the US.

Redwood will work directly with the more than 1,000 Volkswagen Group of America (VWGoA) dealers to collect and recycle end-of-life batteries from VW and Audi electric cars. The collected end-of-life batteries and materials are transported to the Redwood facility in Nevada, where raw materials such as cobalt, copper, nickel and lithium, are extracted and refined. These are then processed into critical battery components, anode copper foil and cathode materials so that the products can be shipped back to domestic battery cell manufacturers.

According to the announcements, the cooperation between the two companies was also agreed in light of the fact that the Volkswagen Group brands plan to launch more than 25 new battery-electric models in the US by 2030. VWGoA wants to start building battery recycling capacity for current and future vehicles in North America now, according to a release. The companies are aiming for more sustainable use of battery components from the time of vehicle assembly to the end of life.

“Redwood Materials is a great partner to help us accelerate EV adoption in America,” explained Scott Keogh, president and CEO of Volkswagen Group of America, Inc. “This collaboration allows us to move closer toward our goal of closing the loop for a circular EV economy, giving American consumers yet another reason to go electric.”

In Nevada, Redwood says it already recycles more than six GWh of lithium-ion batteries each year, enough to power 60,000 electric vehicles. This is the “majority of lithium-ion batteries recycled in North America today”. In anticipation of increasing battery demand in the future, the company has ramped up its own processes, he said. In September 2021, Redwood announced plans to expand its operations beyond just recycling and to produce new materials from the raw materials it recovers itself – it already does so for copper foils.

Redwood has set out to work with leaders in the electric vehicle and clean energy industries to create a domestic, closed-loop battery supply chain. “We’re excited to announce that we’re partnering with Volkswagen Group of America to recycle all end-of-life batteries from Volkswagen and Audi electric vehicles,” Redwood wrote in its own statement. In addition to Volkswagen, Redwood is also reportedly collecting batteries from Volvo and Ford. A few weeks ago, the company was able to win Toyota as a partner. As reported, Redwood is planning two recycling factories in Europe. Several billion euros are to be invested in this in the coming years.