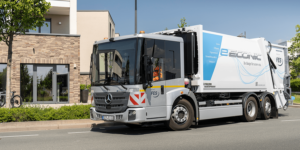 Daimler Truck has started series production of the Mercedes-Benz eEconic. The electric special truck for inner-city municipal use is being produced at the Wörth site in the southern Rhineland-Palatinate. The first vehicle from series production will be delivered to the waste management company Urbaser A/S in Denmark before the end of the year.

The eEconic is the second battery-electric truck to roll off the assembly line in Wörth. In October last year, Daimler Truck started series production of the eActros for urban distribution transport. According to the company, other customers besides Urbaser A/S have already decided in favour of the series-production eEconic, but no details are given.

Daimler Truck has been in the market with the conventional Econic for many years. Against the background of the efforts of many cities and municipalities towards locally CO2-neutral vehicles for their fleets, the company has developed the eEconic in recent years, as Andreas Bachhofer, Head of Location and Production at the Wörth plant, explained during a press conference on the occasion of the start of series production. Not only have the driveline components been electrified, but Daimler Truck has also taken the opportunity to introduce further improvements, says Bachhofer.

The 27-tonne truck is based on the eActros and uses its drive: Three battery packs are installed in the vehicle, each offering an installed capacity of 112 kWh and a usable capacity of around 97 kWh. The two electric motors integrated into the electric axle drive provide 330 kW continuous and 400 kW peak power respectively. According to the company, the range is just under 300 kilometres, although, as with other electric vehicles, the application profile can influence this.

In a short time, the eEconic has now been successfully integrated into the production in Wörth, Bachhofer further explains. The vehicle will be manufactured in the existing assembly line of Mercedes-Benz Special Trucks, parallel to the trucks that will be powered by combustion engines. The eEconic is then taken to the Future Truck Center – where electrification takes place. This means that the vehicle – just like the eActros – is equipped with the electric drive components. Among other things, the high-voltage batteries and the charging unit are installed.

Bachhofer explains that the eEconic is the right approach to zero emissions for the inner-city refuse collection segment with the plannable routes in this area. In addition, the company has established in cooperation with customers that 95 per cent of all journeys are less than 100 kilometres. Another advantage relates to the charging infrastructure; the vehicles return to the depot after use, where depot charging can be organised.

But the eEconic is not only suitable for collecting waste. Daimler also sees airports and the fire service as possible areas of application. “The start of production of the eEconic is another milestone on Daimler Truck’s path to CO2-neutral transport,” the company writes in a statement. In its main sales regions in North America, Europe and Japan, the group aims to sell exclusively CO2-neutral vehicles from 2039.