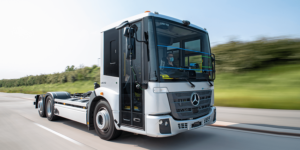 Daimler’s first electric refuse truck is currently undergoing intensive testing and is set to enter real-world trials at customers next. As a series vehicle, the e-truck based on the eActros will roll off the lines at Mercedes’ Wörth plant in the second half of 2022.

Briefly, the eEconic was announced at the beginning of 2020 as a “low-floor municipal vehicle for waste management” – a garbage truck in short.

The 27-tonne EV is based on the eActros, the production version of which was unveiled a few weeks ago. The central technical specifications of both vehicles are identical: among them the electric axle drive with two integrated electric motors and two-speed transmission, battery packs of 105 kWh each (in the eEconic three are installed, the energy content adds up to 315 kWh) and the 330 kW continuous or 400 kW peak power as well as the DC charging power of 160 kW.

When collecting refuse, the recuperation of electrical energy is also said to be particularly worthwhile in stop-and-go operations. Therefore, Mercedes-Benz assumes that the eEconic can cover most “typical Econic refuse collection routes without intermediate charging”. However, no specification was given for the range yet. To compare, the eActros is supposed to cover up to 400 kilometres.

At the moment, the eEconic is being tested by the engineers. The focus is on tests concerning the safety, performance and durability of the vehicle. According to Mercedes-Benz, the eEconic also has to prove itself in tests of batteries and the electric drive train in summer and winter. In addition, the vehicle will be subjected to test further concepts such as noise measurement, electromagnetic compatibility (EMC) and test drives on the bad road, it added.

“We are subjecting the eEconic to an extremely wide range of test series, and the results to date have shown that we are on the right track with our concept. The eEconic is ideally suited for its designated role as a refuse collection vehicle,” expresses Dr Ralf Forcher, Head of Mercedes-Benz Special Trucks. “The high proportion of stop-and-go driving, reliably plannable daily routes averaging 100 km, and the charging of the batteries at the customers’ depots add up to an ideal application for the mission profile of the battery-electric low-floor truck.”

Incidentally, Mercedes does mention some changes to the eActros, but they do not concern the drive. For example, the driver’s cab in the eEconic has been positioned lower than in the long-haul truck, and entry and exit have also been kept lower. There is room for up to four people in the cab.

Since Mercedes-Benz believes that buying an electric truck can only be the first step towards emission-free transport, the company also provides customers with an advisory and service package, including digital tools, to help them make the switch to e-mobility. This “holistic ecosystem”, as the manufacturer calls it, is intended to help integrate the eActros into the fleet, guarantee high vehicle utilisation and optimise the total cost of ownership (TCO). We had already worked up details on this in the context of the eActros unveiling. They apply equally to the eEconic.

In addition to this duo, the battery-electric eActros LongHaul and the GenH2 truck with hydrogen-based fuel cell are to be launched from Daimler Truck in 2024 and the second half of the decade, respectively. “We are consistently pursuing our technology strategy in the electrification of our trucks. Our goal is to offer our customers the best locally CO2-neutral trucks based on batteries or hydrogen-based fuel cells, depending on the application,” said Martin Daum, Chairman of the Board of Management of Daimler Truck AG.

Only recently, Daimler Truck made an important location decision for its electric trucks. In future, further battery-electric and fuel cell trucks are to be built in series at the Wörth plant. Accordingly, Daimler Truck will continue to invest “substantially” in the location in the coming years.

Daimler Truck is to be spun off from Daimler AG and floated on the stock exchange. The commercial vehicle manufacturer is pursuing the ambition of only offering new vehicles in Europe, Japan and North America that is CO2-neutral in operation (“tank-to-wheel”) by 2039. As early as 2022, the vehicle portfolio in the main sales regions of Europe, the USA and Japan is to be supplemented with battery-electric drives. From 2027 onwards, the company plans to add series-production vehicles with hydrogen-based fuel cell drive systems to its vehicle range. The long-term goal is CO2-neutral transport on the roads by 2050.