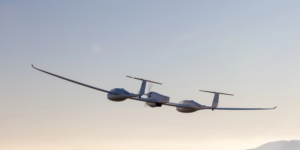 So far, the HY4, which was last exhibited at the AERO trade fair in Friedrichshafen and then at the Farnborough Air Show in the UK, is being operated with gaseous compressed hydrogen. In a few weeks, the pressurised tanks will be replaced by tanks for liquid hydrogen. According to H2FLY, this should double the range of the HY4.

Before the HY4 and the new tanks take to the air, extensive ground tests are scheduled. After all, the storage technologies used differ enormously from each other – sometimes with several hundred bar pressure, sometimes at -253 degrees Celsius. If problems arise during integration or commissioning, they are to be sorted out on the ground and not in mid-air.

According to the company, which is the result of a partnership between the German Aerospace Center (DLR) and the University of Ulm, the integration of the liquid hydrogen system is another important step toward H2FLY’s goal of developing the world’s first fully hydrogen-electric powertrain that integrates fuel cells and liquid hydrogen. The switch from pressurised to liquid hydrogen is a “decisive step” on the way to realising emission-free medium- and long-haul flights, he said.

Liquid hydrogen has the advantage that it has a significantly higher energy density than compressed hydrogen. Moreover, it can be refuelled like a liquid, which makes it easier to handle on the ground. But for hydrogen to remain liquid, it must be cooled to at least 253 degrees Celsius below zero.

The HY4 with pressurised tanks has completed more than 90 take-offs and landings since 2020, including a 124-kilometre, non-stop flight from its home airport of Stuttgart to Friedrichshafen for the AERO. In addition, this year the HY4 has reached a flight altitude of 7,230 feet or more than 2,200 metres, which the company says is a “presumed world altitude record for a hydrogen aircraft”.

In 2021, H2FLY signed a strategic partnership with the aircraft manufacturer Deutsche Aircraft. The two companies are working together to fly a CS25 class aircraft powered by H2FLY’s hydrogen fuel cell technology. The regional aircraft is expected to fly in 2025, while H2FLY says the aircraft is planned to have a 2,000km range and seat up to 40 passengers. These are fairly sensational goals since Airbus is working towards 100-seat hydrogen fuel cell aircraft over 1000-kilometre-range but is not expecting to reach this until 2035, while ZeroAvia’s first product will be a 20-seat hydrogen fuel cell aircraft that should be put into operation in 2024.

“An aircraft that uses liquid hydrogen has the potential to transform the way we travel between cities, regions and countries, delivering true zero-emissions flight on medium and long-haul flights,” said Josef Kallo, co-founder and CEO of H2FLY. “Liquid hydrogen has huge advantages over the alternative pressurised hydrogen gas, not least because it becomes possible to carry a far greater quantity on board an aircraft. The result is that significantly longer ranges are possible.”

Supernal to use eVTOL batteries by EP Systems