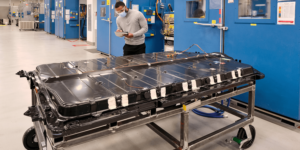 The US manufacturer General Motors has signed agreements with LG Chem and Livent for the supply of battery materials. The company sees this as strengthening its goal of reaching one million units of electric vehicles in North America by the end of 2025.

The binding agreement with LG Chem provides for the supply of cathode active material (CAM). Under it, LG Chem is to supply GM with more than 950,000 tonnes of CAM from the second half of 2022 until 2030.

The cathode material secured through the contract will be used by Ultium Cells, a joint venture between GM and LG Energy Solutions, at its battery cell plants in Warren, Ohio; Spring Hill, Tennessee; and Lansing, Michigan, according to a statement. It is expected to be sufficient for the production of about five million electric vehicles. At the same time, the two companies plan to explore the construction of a CAM production facility in North America by the end of 2025. However, details of this are not given in the announcement.

According to Jeff Morrison, GM vice president, global purchasing and supply chain, LG Chem has demonstrated technical know-how, high quality and the ability to mass produce active cathode materials over the past decade. The material technology used aluminium “to increase stability while reducing the amount of cobalt used in GM’s previous generation batteries by 70 per cent”.

GM now has contractual commitments with strategic partners for all battery raw materials “to support our goal of one million units of EV capacity by the end of 2025,” Morrison adds.

General Motors, for example, has also signed a long-term lithium hydroxide supply agreement with Livent. Under the deal, Livent will provide GM with the battery-grade material over a six-year period starting in 2025. It will be sourced from Livent’s operations in South America and will be used in GM’s Ultium battery cathodes. Over the life of the agreement, processing of the material will increasingly move to the US – with the goal of moving 100 per cent of Livent’s downstream lithium hydroxide processing for GM to North America.

“We are building a strong, sustainable, scalable and secure supply chain to help meet our fast-growing EV production needs,” Morrison says. “We will further localize the lithium supply chain in North America over the course of the agreement.”

The US Department of Energy only recently announced that it was granting Ultium Cells a $2.5 billion loan. The company will use the money to finance the construction of new battery cell production facilities.