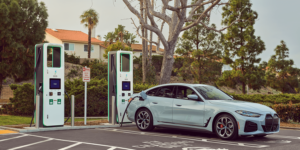 BMW has introduced a new entry-level electric sedan in North America. The BMW i4 eDrive35 has a smaller battery and lower price and features a single electric motor.

The i4 eDrive35 joins the BMW lineup alongside the i4 eDrive40 and the i4 M50. The latter two models are endowed with an 81.5 kWh (net) battery pack, while the new model gets a modest 66 kWh net battery pack. US deliveries are expected to start in the first quarter of 2023 with a base price of $51,400 plus $995 destination and handling.

In terms of technical specs, the BMW i4 eDrive35 is driven by the same Gen5 eDrive powertrain technology found in the BMW iX and the other i4 models. The i4 eDrive35 thus runs on a single electrically-excited synchronous motor, fed by high-voltage batteries with an energy content of 70.2 kWh gross and 66 kWh net. The startup speed is estimated at 0-60 mph time in 5.8 seconds. The max power output is estimated at 210 kW and 400 Nm, making for a WLTP-estimated range of 490 km.

Earlier this year, BMW had also partnered with the Volkswagen subsidiary Electrify America to offer two years of free charging for buyers of the iX and i4. Interestingly enough, BMW had to issue a limited recall for the iX and i4 in the USA yesterday, for just shy of 90 vehicles in total, due to battery issues. In Europe, a recall of the i4 had preceded this one by a few months, although the issue had been due to crash pads not being fitted correctly. The i4 was also brought to the Chinese market in the same month.

In addition to the launch in the United States, the new BMW i4 eDrive35 can now also be ordered in Canada. Interestingly enough, the BEVs are not going to be manufactured in North America for the time being, but will be imported from the factory in Munich. This will have to be updated at some point to qualify for the full new US American EV tax credit, which now requires assembly in the United States, among other things.

Mini rumoured to be considering cooperation with Canoo