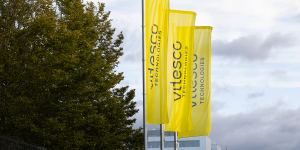 Vitesco Technologies has joined the Swappable Batteries Motorcycle Consortium (SBMC). The consortium was founded in 2021 by the two-wheeler manufacturers Honda, KTM, Piaggio and Yamaha and has now grown to 21 members.

Vitesco says it has two decades of experience in two-wheeler development and most recently presented a system for 48-volt electric drives for two-wheelers at the EICMA motorbike trade fair in November 2021. It is precisely such 48-volt systems that SBMC’s swappable battery standards are to be designed for.

“By joining the Swappable Batteries Motorcycle Consortium, we want to help create the conditions for light motorcycles and scooters to continue to play a central role in future mobility,” says Torsten Bellon, Head of Product Line Non-Automotive at Vitesco Technologies. “We focus on a wide range of different e-vehicles such as mopeds, scooters, motorcycles, three-wheelers, and four-wheelers. The main goal of our SBMC activities is to set standards for future battery management systems and to consistently industrialize them.”

Honda, KTM, Piaggio and Yamaha had announced the SBMC abbreviated consortium in March 2021 and then signed the contracts in September. At that time, other interested companies were also invited to participate.

E-Bike joint ventures by Porsche and Pon take up speed