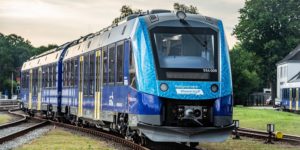 In the German state of Lower Saxony, the world’s first network with hydrogen fuel cell trains in passenger service has now gone into operation. On the route between Cuxhaven, Bremerhaven, Bremervörde and Buxtehude, 14 hydrogen-powered Coradia iLint regional trains are now in operation, replacing 15 diesel trains.

The operation is carried out by Eisenbahnen und Verkehrsbetriebe Elbe-Weser (evb) on behalf of the public transport operator Landesnahverkehrsgesellschaft Niedersachsen (LNVG). The order for the 14 Coradia iLints was placed back in 2017, and the first two were already in service on the route between Cuxhaven and Buxtehude in September 2018. At that time, however, they were still pre-series trains.

This week, the complete fleet of 14 Coradia iLint trains in series trim has now gone into passenger service, and the project has a total volume of over 93 million euros to date. “This project is a role model worldwide, it is an excellent example of a successful transformation Made in Lower Saxony,” says Minister President Stephan Weil. “As a state of renewable energies, we are thus setting a milestone on the path to climate neutrality in the transport sector.”

A hydrogen filling station was built in Bremervörde for the H2 trains, which is operated by Linde. The facility has a storage capacity of 1,800 kilograms of hydrogen, distributed over 64 500-bar high-pressure storage tanks. Six hydrogen compressors supply the two dispensers where the trains can refuel with hydrogen around the clock. For the time being, the hydrogen will be supplied, later it will be produced on site by means of electrolysis and regeneratively generated electricity – corresponding expansion areas for this plant are available.

Since the trains have a range of 1,000 kilometres with one tank of hydrogen, they can cover their daily mileage without a refuelling stop – which takes place once a day outside operating hours. In this way, 1.6 million litres of diesel should no longer be consumed per year.

The state subsidiary LNVG had already started looking for alternatives to diesel trains in 2012. The company still operates 126 diesel trains, but according to Carmen Schwabl, spokesperson for the LNVG management, it does not want to buy any more new diesel vehicles. Because of the early commitment to H2 technology, Schwabl is convinced that they “have thus given an impulse to the development of hydrogen trains in Germany”. “We are also convinced that diesel trains will no longer be economical to operate in the future. We are pleased to have now reached another milestone with our partners Linde and Alstom as well as evb,” says the LNVG Managing Director.

“Emission free mobility is one of the most important goals for ensuring a sustainable future and Alstom has a clear ambition to become the world leader in alternative propulsion systems for rail. The world’s first hydrogen train, the Coradia iLint, demonstrates our clear commitment to green mobility combined with state-of-the-art technology. We are very proud to bring this technology into series operation as part of a world premiere, together with our great partners,” says Henri Poupart-Lafarge, Chairman and CEO of Alstom.