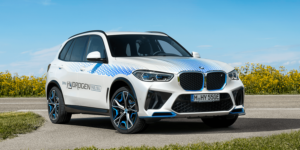 BMW has started its own production of fuel cells for the iX5 Hydrogen at the Hydrogen Competence Center in Munich. The reason for this is the small series of the iX5 Hydrogen, which is to be used worldwide for testing and demonstration purposes from the end of this year.

Preparations for small-scale production have already been underway since May 2021, and in the autumn of last year, the fuel cell car was put on the road at the IAA in Munich. Earlier this year, the FC SUV went into winter testing.

“We are investing almost 500 million euros in hydrogen technology with a research centre and hydrogen refuelling stations. But it also urgently needs hydrogen networks in the south from the federal government,” said Markus Söder, Bavarian Minister-President, as was revealed in the German press release about the carmaker’s fuel cell plans.

As it now stands, Germany has invested in hydrogen refuelling stations, with a total of over 94 hydrogen refuelling stations throughout the country. However, when these were built, German agencies initially focussed on vehicles for private use (which require 700 bar), meaning that only a fraction of these are currently operable at 350 bar and therefore suitable for commercial vehicles. In the many countries that have now issued hydrogen strategies, policies generally concentrate on fuel cell technology for so-called hard-to-decarbonise sectors such as heavy-duty, long-haul vehicles, aviation and shipping. This is because battery electric vehicles have superior energy efficiency but not the energy density that hydrogen fuel cell is capable of for heavy-duty, long-haul transportation. In addition, commercial vehicles have calculable use and routes, which makes their infrastructure needs easier to cater for.

That said, when Toyota brought the Mirai onto the market with fuel cell technology, this was used in a number of different vehicles – including marine applications, even though sales of the fuel cell cars remained low. As a result of this development investment, Toyota collaborates with numerous companies with its fuel cell know-how.

“As a versatile energy source, hydrogen has a key role to play on the road to climate neutrality,” says Oliver Zipse, Chairman of the Board of Management of BMW AG. He added: “And it will also gain substantially in importance as far as personal mobility is concerned. We think hydrogen-powered vehicles are ideally placed technologically to fit alongside battery-electric vehicles and complete the electric mobility picture.”

In the future, BMW will produce the fuel cell system for the iX5 at its own hydrogen competence centre in Munich. However, BMW will obtain the individual fuel cells required for production from Toyota. The two have already been collaborating on FC powertrains since 2013.

The fuel cell systems are manufactured in two steps: First, the individual fuel cells are stacked to form a so-called stack. In the next step, the assembly of all other components into a complete system takes place.

The key technical data have largely been known since 2020: The hydrogen (up to 6 kg) is stored in two 700-bar tanks made of carbon fibre composite. The fuel cell in the engine compartment has an output of 125 kW. Together with the fifth-generation electric motor in the rear, this results in a system output of 275 kW, according to BMW. As in last year’s announcements, BMW does not now specify the energy content of the buffer battery or the range of the iX5 Hydrogen. For the small series, the development team integrated the drive system, consisting of two hydrogen tanks, the fuel cell and the electric motor, into the existing architecture of the BMW X5.

The small series consisting of fewer than 100 vehicles will not be sold or leased but will be tested by drivers in everyday use in Europe, the USA, Japan, South Korea and China.

BMW has started small-scale production of the iX5 Hydrogen hydrogen SUV at the pilot plant of the Munich Research and Innovation Centre (FIZ). From spring 2023, the iX5 Hydrogen will be used as a technology demonstrator in selected regions.

According to BMW, the base vehicles of the hydrogen model developed on the basis of the X5 come from the US plant in Spartanburg. In the body shop of the FIZ, they will then receive a new floor assembly that will enable the accommodation of the two hydrogen tanks in the centre tunnel and under the rear seat bench. In addition to series components, the model-specific 12-volt and 400-volt electrical system, the power battery and the electric motor and fuel cell are integrated in the assembly.

“Positioned in the rear axle area together with the high-performance battery, the electric motor is a product of the current, fifth-generation BMW eDrive technology also employed in battery electric and plug-in hybrid models from BMW,” the Munich-based company further explains. As mentioned above, the fuel cell systems positioned under the front bonnet of the BMW iX5 Hydrogen are manufactured at BMW’s own hydrogen competence centre in Garching, north of Munich.