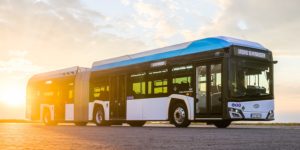 In the run-up to the IAA Transportation, the Polish bus manufacturer Solaris presented its new hydrogen bus Urbino 18 Hydrogen. It is the second hydrogen-powered model after the Urbino 12 Hydrogen.

The first examples of the 18-metre articulated bus with fuel cell are to be delivered from the second quarter of 2023, according to Solaris. Solaris organised a separate event for the premiere, but the FC articulated bus nevertheless joins the long list of innovations in electric commercial vehicles this September – around the IAA Transportation. The company already has a battery-electric bus in the 18-metre class, the Urbino 18 electric. As far as fuel cell vehicles are concerned, there has only been the Urbino 12 hydrogen so far.

Depending on the configuration, the new articulated bus offers space for up to 140 passengers and, like the twelve-metre bus, has a range of up to 350 kilometres on one tank of fuel. However, the larger and heavier articulated bus requires more hydrogen for this: the tanks on the vehicle roof can hold up to 51.2 kilograms of hydrogen, compared to a maximum of 36.8 kilograms for the Urbino 12 hydrogen.

According to Solaris, the Urbino 18 hydrogen can be refuelled in about 20 minutes. In addition to the tanks made of composite material, batteries with a capacity of about 60 kWh are installed. As is usual with FCEVs, these have a supporting function and are used for acceleration and energy recovery.

Solaris is reticent about the exact technical data of the fuel cell and the drive in the press release. The supplier of the fuel cell modules is also not mentioned – for the Urbino 12 hydrogen it was Ballard Power Systems. A 60 kW fuel cell was installed in the 12-metre bus, while the two electric motors integrated into the rear axle each produce 125 kW. If the power demand is above 60 kW, energy is drawn from the batteries, which are then recharged when the power demand is lower. The data for the articulated bus is not yet known.

Solaris also provided further details about the bodywork. As a standard solution in the new model, an air conditioning system for the passenger compartment with a heat pump will be installed. Since the hydrogen tanks are located on the roof and the electric drives are installed on the axles to save space, the classic engine tower of a combustion engine bus is no longer required – which increases passenger capacity. Optionally, customers can also order automatic driver assistance systems such as MirrorEye and MobilEye Shield+.

The current version of the FC Urbino 12 hydrogen solo bus had been presented by Solaris in the summer of 2019. Initially, however, the interest of the market was manageable. For about a year, however, Solaris has been able to record significantly more orders for the twelve-metre bus with hydrogen-electric drive – almost 100 units have been delivered in the meantime.