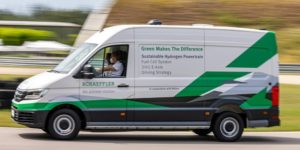 Schaeffler is also looking at hydrogen to power commercial vehicles, especially for long-distance travel. The automotive supplier has developed components for fuel cell systems and is preparing their industrialisation.

At the IAA Transportation in Hanover, Schaeffler will show a demonstration vehicle, which has been completely rebuilt on the basis of an electric transporter. For this purpose, the supplier worked together with its cooperation partner Refire, a Chinese maker of fuel cell technology. According to the press photos, the basis for the conversion was a VW Crafter. This means that Schaeffler has chosen the same vehicle as Bosch, that will also bring two fuel cell transporters to the trade show in Hanover, as href=”https://www.electrive.com/2022/09/13/bosch-begins-testing-fuel-cell-transporters/”>reported.

The FCEV, which will debut at the Hanover exhibition centre in outdoor area U47, has a 50 kW fuel cell. Schaeffler does not provide any information on the size and location of the hydrogen tanks. The battery has a capacity of 13 kWh and can deliver up to 85 kW of power. The 3in1 axle has a maximum output of 140 kW.

“For Schaeffler, the fuel cell is a sensible addition to the drive mix of commercial vehicles,” said Matthias Zink, Member of the Executive Board for Automotive Technologies at Schaeffler AG. “Fuel cell drives will initially become established primarily for commercial vehicles in interurban traffic. But vans that regularly cover longer distances can also benefit from the advantages of hydrogen operation.”

Therefore, the supplier is already preparing for the production of FC components: Together with Symbio, Schaeffler wants to produce bipolar plates for fuel cells in large series from the beginning of 2024. The bipolar plate is the key component of an FC stack and is one of the decisive factors for the efficiency of the system. It accounts for up to 80 per cent of the weight and up to 65 per cent of the volume of the stack, although it is only between 50 and 100 micrometres thick.

While the FC transporter will be exhibited in the outdoor area as mentioned, Schaeffler will present two electric motor families for heavy electric commercial vehicles indoors.