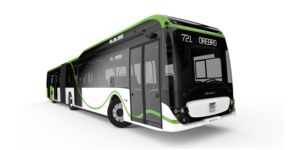 The Dutch electric bus manufacturer Ebusco has received another order from the Nordic public transport operator Nobina, this time for Norway. The order is for 76 Ebusco 3.0 electric buses, which will be delivered at the end of 2023 and will be used in the Oslo area.

Nobina is ordering 22 units of the Ebusco 3.0 in the 12-metre version and 54 units in the 18-metre version. This is the first time for the public transport operator to use Ebusco buses in Norway. Until now, Nobina’s Ebusco electric bus orders have all been for Denmark.

The Ebusco 3.0 is the Dutch company’s latest model, unveiled in 2019. The 3.0 features a lightweight chassis that enables the vehicle a greater range. The company’s earlier model, the Ebusco 2.2, is still on offer and still garnering new orders.

The 76 electric buses now on order are to be used by the public transport company Ruter in Norway and run in and around Oslo. The new order will bring the number of Ebusco buses in the entire Nobina fleet to 176. The total number of electric buses in Nobina fleets is actually much larger since Nobina has also purchased electric buses from bus makers BYD, Van Hool, MAN and Volvo.

“As the largest public transport operator with the largest fleet of electric buses in the Nordic region, we take great interest in the development of new sustainable buses, technology, and materials from Ebusco,” said Jens Råsten, fleet manager at Nobina Group, speaking about this recent order. “Also, in Ebusco’s enhanced European production capabilities for our passengers and PTA´s in the Nordic region.”

Elsewhere in Nordic countries, Ebusco buses are also on the road in Sweden. These were ordered by the public transport company Svealandstrafiken in June this year. Just like this most recent order in Norway, the recent order in Sweden for the new 3.0 model. As said above, the earlier model is still proving popular, and 90 examples of the 2.2 model are currently under order in Berlin, Germany, with options for many more within the next 12 months.