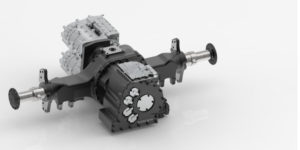 Volvo Trucks has unveiled a new all-electric rear axle at IAA Transportation. The new electric axle allows more space for batteries in the truck by integrating the electric motors and transmission into the rear axle. According to Volvo, this should bring advantages especially in long-distance transport.

After all, more space for batteries means more potential range. According to a company statement, Volvo Trucks intends to start series production of trucks with the new electric axle drive “in a few years”. For the time being, Volvo does not provide technical details on the new component. Only this much: Not only BEV but also fuel cell vehicles are to benefit: While the electric axle drive in battery-electric trucks creates more space for batteries, the additional space in hydrogen trucks is to be used for the “installation of other components”.

“This is a breakthrough for electric trucks and a clear signal that there will be a huge demand for public fast-chargers for heavy trucks in the near future, not the least along highways,” said Jessica Sandström, SvP Global Product Management at Volvo Trucks. Initiatives in this direction already exist: as is well known, Volvo is cooperating with Daimler Truck and the Traton Group to set up a high-performance charging network for heavy trucks and coaches in Europe via a joint venture.

Volvo Trucks currently has six battery-electric trucks on the market. According to Sandström, the production of these trucks will be continued. In a few years, she said, they will then “add the new electric axle – for customers who want to travel longer distances than today.”

Like Daimler Truck, Volvo Trucks is also pursuing a two-track approach in the development of zero-emission trucks. The Swedish company is not only working on BEVs but also on FCEVs. The latter are scheduled to come onto the market in the second half of this decade. Testing in commercial transport – Volvo Trucks specifies in a recent announcement – will start with selected customers in Northern Europe in 2025.

“I believe that the pilot tests will highlight the potential for fuel cell electric trucks. The tests will run in a demanding, harsh climate and it also give us a great opportunity for driving with heavy loads up 65 tonnes,” Sandström said.

Volvo’s electric trucks will be equipped with two fuel cells with an output of 300 kW and a refuelling time of less than 15 minutes. The fuel cells will be supplied by Cellcentric, the joint venture between Volvo Group and Daimler Truck AG.

Solectrac to expand dealer network in the USA