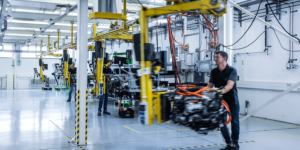 As reported, the joint venture is to develop, produce and market fuel cell systems ready for series production. The focus is on heavy trucks, but the systems are also to be offered for other applications – such as stationary energy systems. In the course of the foundation, Volvo and Daimler have now also confirmed the concrete objectives: Customer testing of fuel cell trucks is to begin in about three years, i.e. in 2024, and series production is to start in the second half of the decade.

Daimler Truck AG and the Volvo Group have equal shares in the fuel cell joint venture. To this end, Volvo purchased 50 per cent of the shares in Daimler Truck Fuel Cell GmbH & Co. KG for the sum of about 600 million euros. “The companies will remain competitors in all other business areas such as vehicle technology or vehicle integration of fuel cells,” Daimler announced in an accompanying press release.

In April 2020, Daimler Trucks and the Volvo Group had initially agreed on a preliminary, non-binding agreement. Already at that time, the establishment of a joint venture was mentioned as a goal. In June, Daimler took a preparatory organisational step on the way to the joint venture with Volvo Trucks around commercial vehicle fuel cells: In the newly founded Daimler Truck Fuel Cell GmbH & Co. KG, all of the group’s fuel cell activities were bundled, including the former Mercedes-Benz Fuel Cell GmbH, which among other things, developed the drive system for the Mercedes GLC F-Cell passenger car model. In November, both sides then signed a binding agreement to found Cellcentric.

Specifically, the joint venture wants to develop a system with several performance levels. Among them is a “dual system with 300 kW continuous power for heavy long-distance trucks”, as the initiators announced in November.