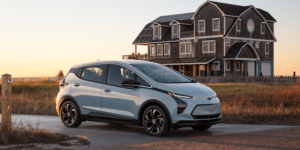 General Motors has announced that it will increase production of its electric models due to high demand – and not only for the new Ultium vehicles but also for the ageing Bolt series. This comes despite the previous production capacity not being fully utilized.

According to the GM announcement, Bolt production for global markets is to be increased from around 44,000 units this year to more than 70,000 vehicles in 2023. That said, Chevrolet has never been able to reach its previous production capacity of 44,000 vehicles per year in the past: 24,828 Bolts were sold in the previous record year of 2021. In the first three quarters of 2022, sales were down about eleven percent to 14,709 units.

The Bolt has been on sale since late 2016, and in early 2021 the lineup was revised to include a longer version called the Bolt EUV. This summer, however, the price was reduced by up to $6,000 in the United States. GM had also offered owners who bought their Bolt before the price cut took effect a credit of up to $6,000 – subject to a number of conditions that should not be underestimated. This was preceded by a major recall of the Chevrolet Bolt due to battery problems. Since all available batteries were needed for the recall, GM had to pause production of new Bolt units in the interim. The Bolt is built at the Orion Township plant in Michigan.

But production of other electric vehicle models is also expected to increase: For the production of the Cadillac Lyriq (in Spring Hill, Tennessee), measures are to be taken in the fourth quarter, but no figures are given.

The work in Detroit at Factory Zero will probably be more extensive: Starting at the end of November, vehicle production there will be paused for several weeks to prepare the body shop for production of the Chevrolet Silverado EV. However, GM had delivered only 782 Hummer EV pickups in the current year anyway. There had already been similar conversion work in the summer.

On the occasion of the production increases, GM also stated that EV model launches are on schedule for 2023. Among them is the aforementioned Silverado EV, which will be built in Detroit. 2023 will also see the launch of the Blazer EV and Equinox EV models, both of which are scheduled to come off the line in Ramos Arizpe, Mexico.