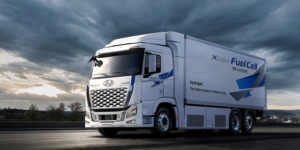 According to media reports, Hyundai is stopping its fuel cell truck project in Switzerland. “Extremely fluctuating energy prices” are apparently the cause, however, Hyundai has since denied that the initiative will be stopped.

To recapture, Hyundai wants to bring 1,600 FC Xcient trucks to the Alpine nation by 2025. The Korean company handed over the first units at the end of 2020.

Beat Hirschi, CEO of Hyundai Switzerland, confirmed this to the Swiss trade journal trans aktuell (Euro Transport online). However, the CEO also told the publication, that the project would be discontinued. Only the pay-per-use programme for the 47 Hyundai Xcient already driving on Swiss roads will continue, he said, according to trans aktuell. Hints of an abrupt end to the project had previously also come from among waiting customers. Hyundai apparently cancelled contracts for hydrogen trucks that were about to be delivered. The reason given to customers was the lack of availability of green hydrogen.

Today, Hyundai quickly responded denying the cancellation of the programme, succinctly stating on LinkedIn: “Neither Hyundai nor any partner involved in the hydrogen ecosystem in Switzerland intends to stop the existing initiative”. Hyundai does admit that the current delivery situation for green hydrogen is not ideal, however, this does not seem to be dampening their long-term plans: “The unpredictable disruption in the energy market affects the availability and costs of electricity from sustainable energy sources. This includes the production costs of green hydrogen in the short and medium term. Nevertheless, all the players in the Swiss hydrogen ecosystem are fully committed to their goals to further expand and develop solutions to adapt the overall system to the new situation,” the company states.

The South Korean company expects that the hydrogen filling station and production issues will soon be resolved, as “eleven publicly accessible filling stations currently offer green hydrogen, and three more locations are about to start operations”.

To put things in perspective, Hyundai announced in 2019 that it wanted to establish its just-launched H2 truck in Europe via Switzerland. To this end, the manufacturer founded the joint venture Hyundai Hydrogen Mobility (HHM) with the Swiss startup H2 Energy – a private-sector association of motivated companies. The business model: customers should lease the hydrogen trucks from Hyundai Hydrogen Mobility on a pay-per-use basis that requires no initial investment. By 2025, 1,600 examples were to roll onto Swiss roads in this way. The first examples were handed over at the end of 2020.

While HHM was founded to coordinate the project, a second joint venture called Hydrospider was created in the slipstream of the project, in which Alpiq, H2 Energy and Linde are involved and which was to manage the production of green hydrogen, its storage and delivery to filling stations. This is because the model for Switzerland envisaged the use of green hydrogen only.

This is where Hirschi appears worried: “With the extremely fluctuating energy prices, we cannot offer fixed conditions for eight years.” Instead of being transported to Switzerland, the fuel cell trucks are now to be offered for sale in Germany, where they are subsidised by the state even if conventionally produced hydrogen is used. That Hyundai wants to push the export to Germany was announced by the manufacturer in August. For the time being, seven German companies will put 27 examples of the vehicle into fleet service.

What will become of the two joint ventures interwoven with the Swiss project is unclear. According to the report, there will also be no more sales of the Xcient in Switzerland. The 47 units already delivered in the course of the pay-per-use programme will thus remain among themselves. The media reports that there is also criticism of the hydrogen trucks – for example, with regard to the range and the only slowly growing filling station network.

According to Hyundai, the Xcient is tailored to the requirements of fleet customers. The model is equipped with a 350-kW electric motor with a maximum torque of 2,237 Nm. In addition, a 180-kW hydrogen fuel cell system with two 90-kW fuel cell stacks is installed. Seven hydrogen tanks – refuelling is said to take around eight to 20 minutes, depending on the ambient temperature – offer a combined storage capacity of around 31 kilograms of fuel. A 72-kWh battery serves as a supplementary energy source. The company specifies a maximum range of 400 kilometres.

The model came onto the market in 2020, having been announced in 2019. In the middle of last year, Hyundai presented a revised version. The model is supposed to be – according to the Koreans’ August statement – “the world’s first mass-produced hydrogen-powered electric truck for heavy-duty transport”. In addition to the 47 units in Switzerland, there are also a few units in use in the USA so far.

3 Kommentare zu “Is Hyundai pulling out of hydrogen project in Switzerland?”