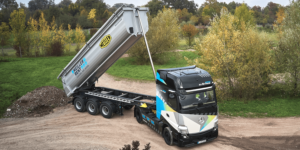 Around one in five Mercedes-Benz trucks sold in Europe is in the construction site segment. The Stuttgart-based company is now also turning its attention to vehicle development for this energy-intensive business: in the form of specially prepared prototypes of the eActros LongHaul and the Arocs, as well as an eActros with an electrified roll-off tipper.

Mercedes-Benz Trucks is showing all three vehicles at the Bauma construction trade fair in Munich, which started yesterday. The battery-electric long-haul truck eActros LongHaul had just been unveiled by the manufacturer at the IAA Transportation in Hanover. Further south, Mercedes-Benz Trucks is now putting the spotlight on a concept prototype of the model with an electric interface for trailers.

Via the power take-off, it will be possible to operate hydraulic work equipment around construction site operations – such as tipper semi-trailers or walking-floor trailers. The system developed for the eActros LongHaul and presented as a prototype at Bauma has a continuous output of 58 kW and a torque of 300 Nm. In series production, the electric power take-off is to generate a significantly higher output. Mercedes-Benz Trucks is working on the corresponding technology for long-haul trucks together with the Munich-based tipper manufacturer Meiller. The jointly developed system combines the inverter, the e-machine, the control unit as well as the familiar tipper semi-trailer hydraulics in a design tailored to the vehicle behind the driver’s cab.

And this is how it works: The electric power take-off converts the direct current of the high-voltage mains into alternating current by means of the inverter and thus supplies an additional electric motor. This drives a pump that provides the hydraulic power to operate the trailer. In contrast to the diesel-based units commonly used to date, “with the electric power take-off we achieve complete local CO2 neutrality as well as a greatly reduced noise level,” the commercial vehicle manufacturer informs us.

And importantly, the eActros LongHaul can be equipped with standard trailers “thanks to the compact design of the system”. In the exhibition light at Bauma, for example, it shoulders a conventional tipper semi-trailer. The manufacturer sums up: “This makes the e-truck suitable for deliveries to construction sites and can replace previous diesel-based drive solutions both in terms of transport and the power take-off.” This explicitly refers to road-oriented applications. The new E-Arocs is designed more for construction site mud. More on this in a moment.

The performance data of the eActros LongHaul known so far can be read here. The model will allow a range of around 500 kilometres and, according to the manufacturer, should be able to compete with comparable diesel trucks in terms of durability. Mercedes-Benz Trucks, for example, claims to have designed it for 1.2 million kilometres of mileage in ten years of operation. The eActros LongHaul is to be tested on public roads for the first time this year. Customer trials with near-series prototypes are planned for 2023, followed by the market launch in 2024.

Specifically, the Passau-based company is equipping the trucks supplied by Mercedes from the Wörth plant with an electric drivetrain. Paul is using an electrified central motor solution. The idea behind this is that the outer planetary axles of the conventional Arocs can continue to be used in order to provide the ground clearance and off-road capability required for construction site use in the electric vehicle models as well.

The prototype of the ‘Battery-Electric Arocs’ shown at the Bauma trade show in Munich is equipped with an electric truck mixer superstructure from Liebherr-Mischtechnik, which draws its energy via an interface from the batteries of the Arocs and has a nominal volume of nine cubic metres.

The preliminary performance data read as follows: The vehicle’s electric drive train delivers a continuous output of more than 300 kW and a peak output of just over 400 kW. The battery, which is housed behind the driver’s cab and in the chassis, can be assembled from either six or seven packs, each with 60 kWh of usable energy. The energy content of the total battery thus amounts to 360 or 420 kWh. According to the Paul Group, this makes “ranges of significantly more than 200 kilometres possible”. In addition, the prototype has an 800-volt electrical system and, according to the converter, can be charged from 20 to 80 per cent in the configuration with six battery packs at a 150 kW charging station within about 1.5 hours. AC charging is also possible.

According to the partners, there will be a small series of the Battery Aroc at the end of 2023. Models can initially be ordered exclusively within Germany as 4- and 3-axle trucks for Liebherr truck mixer, flatbed and tipper applications, they say. Paul will be the main distributor, and the group will also take care of all service and maintenance work for the trucks.

As the third in the group, Mercedes-Benz Trucks will be showing the eActros 300, which has already been launched on the market, in a variant for road-oriented construction applications. The electric power take-off used in this model comes from ZF. At Bauma it can be seen in combination with the roll-off tipper from Meiller (and at the Palfinger stand also with their skip loader). We already reported in detail on the eWorX power take-off last year. This is also a one-box solution that integrates components such as the electric motor, inverter, electronic control unit and application-specific software modules.

Daimler Truck’s subsidiary Fuso is also presenting a version of its eCanter electric truck optimised for the construction industry at Bauma. The all-electric truck with a capacity of up to 8.55 tonnes will in future be offered on request with bodies suitable for construction sites – for example with a roll-off tipper from Unsinn, a tipper from Meiller and a crane from Atlas. Here are the details.

“We are working on a completely CO2-neutral portfolio – including the demanding construction segment,” emphasises Karin Rådström, CEO Mercedes-Benz Trucks. “Particularly versatile, robust and powerful trucks are in demand here. It is also a very complex area for electrification due to the wide variety of applications. Partnerships between vehicle manufacturers and bodybuilders are therefore crucial to offer our customers the right solutions.”