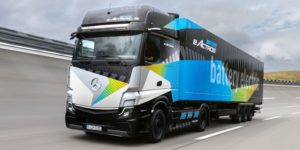 Daimler Truck has brought a concept prototype of the eActros LongHaul to IAA Transportation and revealed further technical details surrounding the battery-electric long-haul truck. The 40-t truck will drive with up to 600 kWh battery capacity and 600 kW peak power.

It had been previously announced that the eActros LongHaul would be ready for series production in 2024 with a range of around 500 kilometres and would then roll off the production line in Wörth am Rhein. Daimler Truck had also announced in advance that the heavy-duty truck would support the future truck charging standard MCS (Megawatt Charging System). The Board of Management confirmed both in the presentation of the prototype – supplemented by a few more interesting facts.

The eActros LongHaul will be based on an electric rigid axle with two integrated electric motors, just like the classic eActros (with the epithet 300 or 400). These generate a continuous power of 400 kW and a peak power “of over 600 kW”. To compare, the two smaller models, eActros 300 and eActros 400, have a continuous output of 330 kW and a peak output of 400 kW. For energy storage, the LongHaul carries three lithium iron phosphate battery packs on board, boasting its capacity to over 600 kWh. The standard eActros’, which have a maximum capacity of 27 tonnes and have been delivered since the end of February, have 315 and 420 kWh, respectively and a maximum range of around 400 kilometres.

Later in series production, the batteries of the eActros LongHaul should be able to be charged from 20 to 80 per cent in well under 30 minutes with about one megawatt. Interestingly, Daimler Truck has switched to lithium iron phosphate cell technology for the first time in its electric heavyweight. According to Karin Rådström, CEO of Mercedes-Benz Trucks, because of the long service life and more usable energy. The vehicle is expected to achieve 1.2 million kilometres in ten years of operation.

Speaking to journalists yesterday, Rådström added that the new generation Fuso eCanter will also use LFP batteries and that the range of smaller and medium-sized electric trucks will also switch to LFP in the longer term. This is likely to include the eActros 300/400, whose cells contain a nickel-manganese-cobalt (NMC) chemistry. The battery cells for the regular eActros come from CATL, but a year and a half ago, the agreement was extended to include the eActros LongHaul. So CATL is likely to supply battery cells with different cell chemistries, at least temporarily.

But back to the overall impression of the eActros LongHaul: The prototype shown at the IAA still features a closed and smooth front surface, but the headlights are more reminiscent of the familiar Actros than in the first renderings from 2020. A striking feature is an LED light strip in the front area that is supposed to give “a preview of the design language of the production vehicle”. By way of comparison: the classic eActros can hardly be distinguished visually from the familiar Actros with diesel engine.

In addition to the semitrailer tractor, Mercedes-Benz Trucks also plans to produce platform chassis variants of the eActros LongHaul right from the market launch. This will be done at the truck plant in Wörth am Rhein. The 40-tonne truck will be the first fully electric series-production vehicle from Mercedes-Benz Trucks to be manufactured completely in Wörth, including the installation of all electric components on the existing assembly line. “This enables high production capacities and completely parallel production of both conventional and fully electric trucks on the same assembly line,” the company explained. The eActros 300/400 and the eEconic (known to be a variant of the eActros for municipal use) have so far received their EV components in a separate process at the Future Truck Center in Wörth.

Rådström said in the programme surrounding the IAA that customers from the long-haul segment were noticeably hesitant about electrification. “They fear insufficient range, the high initial investment and a lack of parity with diesel trucks.” Around the eActros LongHaul, her company is therefore creating an ecosystem with consulting, service packages for eMobility entry, the newly founded Financial Services business line and the development of public charging infrastructure with Volvo and Traton.

Rådström also points out that 60 per cent of long-distance transport in Europe is 500 kilometres or shorter, which means that depot charging instead of public charging could even be the norm for the eActros LongHaul. In addition, the model’s total costs of ownership (TCO) are said to be lower than those of a comparable diesel model.

The first prototypes of Daimler’s long-distance vehicle-hopeful are currently undergoing tests – before the end of the year they will also be put on public roads. Amazon and Rhenus will then test the eActros LongHaul in real-world operations from 2023. A few days ago, the two companies signed a memorandum of understanding with Mercedes-Benz Trucks.

Daimler Truck, which was present at this year’s IAA for the first time as an independent DAX company, describes the eActros LongHaul as a very important product launch in an important segment. The model will play the central role at the manufacturer’s IAA stand, but Daimler Truck will also be presenting other innovations, such as the eActros 300 as a tractor unit.

According to Daimler Truck, this new model variant of the eActros 300 can pull all common European trailers, taking into account the maximum permissible overall towing length. The installed technology is familiar from the standard eActros: Three battery packs, each with 112 kWh installed battery capacity, enable a range of up to 220 km. Series production is scheduled to start in the second half of 2023.

And the electric truck family is set to grow further: the Daimler Truck subsidiary Fuso is presenting the next generation of the fully electric light truck eCanter in Hanover. The parent company has also announced its intention to launch a battery-electric Mercedes-Benz eAtego. The vehicle is to compete in the medium-duty segment. Further details are not yet available.

In principle, Daimler Truck aims to offer only new vehicles in Europe, Japan and North America that are CO2-neutral in tank-to-wheel operation by 2039. As an intermediate stage, CO2-neutral commercial vehicles should account for up to 60 per cent of Daimler Truck sales in the EU30 markets as early as 2030. From the second half of the decade onwards, the company intends to supplement its electrified vehicle range with series-produced vehicles with hydrogen-based fuel cell drive systems. Against this background, the first prototypes of the Mercedes-Benz GenH2 Truck are already in test operation.

“Since the last IAA four years ago, we have moved forward at full speed with the transition to CO2-neutral transport,” emphasises Martin Daum, CEO Daimler Truck. “This year, we already have eight pure battery-electric series-production vehicles in our portfolio.” However, he adds, it is not enough just to have the right vehicles in the range. “Our customers also need the suitable infrastructure,” says Daum. “We are active here at a wide variety of levels. For a rapid build-up, it is essential that the entire industry and governments pull together.”

Reporting by Cora Werwitzke from Germany.

Daimler shows off new applications of eActros at the IAA