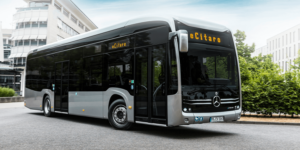 The Danish bus company Vikingbus has ordered 31 Mercedes-Benz eCitaro. These are to be primarily operated in the municipality of Køge, a port city located south of the Danish capital Copenhagen in the east of the island of Sjӕlland.

The city buses are scheduled to enter service at the turn of 2023/2024. Daimler Truck says the 31 eCitaro are equipped with batteries of the latest generation NMC3 with high energy density and a total capacity of 588 kWh.

The buses’ large battery is necessary to cover longer distances since they will not only operate on the road in Køge itself, but also in the rural areas around the municipality. The regular service also includes routes as far south as Stevn, where the vehicles cover distances of up to 500 kilometres a day – greater than the typical distances for city buses.

Daimler Truck has not elaborated on the way eCitaro buses will be charged at Vikingbus. The eCitaro is designed for wired CCS charging at the depot, but can optionally also be ordered with various pantograph systems for fast charging along the route.

The 31 zero-emission buses were accompanied by orders for fossil-fuelled vehicles from Mercedes Benz. In addition to the order for the 31 eCitaro, Vikingbus has ordered “several” Mercedes-Benz Intouro buses with conventional combustion engines for use as school buses in the Jutland region, as well as ten new-generation S 517 HDH type luxury touring coaches from Setra. “Several” Intouro and Setra 517 HDH vehicles are also planned to go into service in 2023.

Vikingbus operates around 450 city buses, intercity buses and coaches, as well as 13 nationwide bases. The company does not say on its website, what proportion of its fleet is electric nor what proportion it is targeting within a given time frame. In 2020, the six largest municipalities in Denmark said they only procure electric city buses from 2021 onwards. From their side, Daimler Buses has said that it will only sell electric city buses from 2030. Daimler Buses plans to launch the first all-electric intercity bus first from 2025 and fuel cell-powered coaches not until the end of this decade.