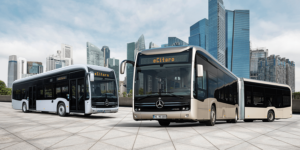 Daimler Buses wants to offer CO2-neutral vehicles in all segments in Europe and Latin America by 2030 and only sell all-electric vehicles for city buses in Europe. To achieve this, there will be a new series and updates for existing models.

Daimler Buses plans to launch the first all-electric intercity bus from 2025 and fuel cell-powered coaches from the end of this decade. This was announced by the manufacturer on the occasion of its own “Daimler Buses eMobility Days”. Daimler Buses is relying on the dual strategy with batteries and hydrogen, as also implemented at Daimler Truck.

“As the world’s leading bus manufacturer, our ambition is clear: we want to make a contribution to combating climate change and be a driver of the transport turnaround needed to achieve this,” says Till Oberwörder, Head of Daimler Buses. “To this end, we are pursuing a clear electrification strategy and are putting buses with alternative drive technologies on the road in series production.” Oberwörder announced that Daimler Buses would only offer CO2-neutral new vehicles in the city bus segment in Europe from 2030 at the latest and would no longer invest in Euro VII: “We are focusing our investments on a purely electric city bus segment in Europe by the end of the decade.”

Federal Transport Minister Volker Wissing also came to Mannheim for the “Daimler Buses eMobility Days”. “To achieve our climate goals, we need more zero-emission vehicles. We actively support public transport companies to decarbonise their fleets and provide them with the corresponding infrastructure,” said Wissing. “We have earmarked a total of 1.25 billion Euro for this purpose. Our goal: by 2030, every second city bus should be electrified.”

Daimler Buses also wants to support its customers in the electrification of the depots. As part of its service offering, Daimler Buses will in future act as a general contractor for customers’ complete electric infrastructure. Until now, the Group has only provided advice in this area, and customers had to commission the installation themselves – this is where the new offer is intended to significantly simplify the subject of infrastructure for customers.

“We take a holistic view of electrification and go far beyond the vehicle itself. We supply our customers with electric mobility on a ‘turnkey’ basis, which means they get from us all the modules they need for a functioning electric bus service,” says Oberwörder. “We supply the buses, we plan the necessary infrastructure as well as the charging management, we manage the conversion of the depot and we train the staff. Our goal is for electromobility to become an everyday reality in the bus business.”

The question of the necessary infrastructure will soon become a little more complex again for some customers: From 2023 onwards, Daimler Buses will also equip its so far purely battery-electric Mercedes-Benz eCitaro city bus with a fuel cell as a range extender. Such a drive option was already announced at the vehicle’s unveiling in July 2018, but was not yet on offer – although orders for the fuel cell range extender have already been received.

Since Cellcentric’s own fuel cells are still in development and the factory is not even under construction yet (even though an important hurdle was recently cleared here), Daimler Buses currently still has to buy in the FC modules. In the case of the eCitaro Range Extender, Toyota is the supplier. According to the Japanese company, it is the flat module TFCM2-F-60, which has an output of 60 kW. In the flat version, it can be “easily integrated into the roof of the bus alongside the battery and hydrogen tanks”, Toyota writes.

Unlike in the FC buses from CaetanoBus, where Toyota also supplies the fuel cell modules, the FC system is not the main energy source here. In the eCitaro, the fuel cell is to be used in such a way that intermediate charging on the way becomes superfluous on longer routes. Toyota specifies a range of 400 kilometres for the solo bus, and 350 kilometres for the 18-metre-long articulated eCitaro G bus.

In addition, Daimler Buses will offer the eCitaro with a new generation of batteries from the end of 2022. The capacity per cell is to increase by around 50 per cent with the same weight. Daimler then promises “reliable ranges” of around 280 kilometres for the solo bus – instead of the 400 kilometres mentioned with the range extender. This battery generation will be used in the pure battery buses, the new range extender model as well as the chassis eO500U from Brazil.

Oberwörder gave further details to the German Press Agency DPA. He was a little more optimistic than his press department and instead of the 280 kilometres in the press release he said that “with the new battery we could cover about 300 kilometres”. The battery will be supplied by the Darmstadt-based company Akasol. Oberwörder did not give any details about the upcoming intercity bus and the BZ coach in the interview.

On the occasion of the “eMobility Days”, Daimler Buses states that 600 eCitaro are now on the road with European customers. Last year, almost every second fully electric city bus sold in Germany was an eCitaro. However, according to DPA, Daimler Buses did not disclose the share of electric vehicles in the 18,736 buses delivered last year.