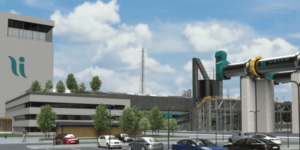 Both a lithium refinery and a recycling plant for electric vehicle batteries are to be built in Teesside in the north-east of England. Both projects are supported by the new British government and are expected to create hundreds of local jobs.

Firstly, Green Lithium has chosen this site for its announced lithium refinery and will receive more than £600,000 in UK government funding. According to earlier information, battery-grade lithium hydroxide is to be produced from 2024, with the factory reaching full capacity in 2026.

Secondly, the company Altilium Metals is setting up shop in Teesside to build a recycling plant for electric vehicle batteries. Specifically, battery waste from more than 150,000 electric vehicles will be converted into cathode active material for new batteries there. Altilium is receiving £3 million in funding from the UK government for this.

At Altilium Metals, the exact location is not yet known, but the area around Middlesbrough has now been chosen as the “preferred site for the UK’s first recycling facility”, according to CEO Kamran Mahdavi. The exact location decision is expected to be made in early 2023.

Commenting on Green Lithium’s plans, Grant Shapps, who was still transport minister under ex-Prime Minister Boris Johnson and was responsible for the economy in Rishi Sunak’s cabinet, said the plant could be used to meet up to seven per cent of Europe’s total lithium demand. “We’re backing companies, like Green Lithium here in Teesside, to grow the new, green industries across the UK, sparking jobs and growth for decades to come,” the Business Secretary said during an appearance on Teesside.

Green Lithium in Teesside is expected to directly create 250 jobs, and more than 1,000 jobs could be located in the surrounding area with construction companies. At Altilium Metals, 200 full-time jobs are planned, and “hundreds more jobs” could be created for the construction of the plant.