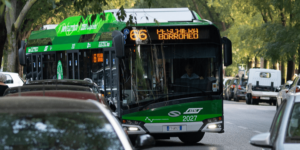 Milan’s public transport company ATM has invited tenders for the procurement of 340 low-floor battery buses worth around 330 million euros. The tender is comprised of three different lots for different electric bus lengths, floor and door configurations

The largest lot of the ATM Milan tender is for 205 battery-electric buses with a length of about 12 metres and three double doors. This part of the tender is worth more than 183 million euros.

The second lot, worth 126 million euros, is for procuring 105 electric buses with a length of about 18 metres and four double doors. The third lot is for 30 electric buses with a length of about 12 metres in two- and three-door configurations. The first two lots of the tender are for low-floor vehicles with contracts that should run for around 200 months since these cover not only the delivery of the vehicles but also full-service maintenance in operation. The 30 vehicles from the third lot of the tender are to be delivered within three years.

In 2020, the public transport operator ordered more than 100 electric buses from Solaris. In February 2022, the Milan City Council cleared the way for 249 million euros for ATM’s fleet renewal programme to provide 350 new electric buses and the infrastructure for them by June 2026. In December 2021, Milan’s public transport operator ATM ordered 50 trolleybuses from Solaris. The follow-up order saw ATM exercising an option from a 2019 framework agreement. Solaris already delivered 30 Trollino 18 trolleybuses to the Italian city.

So far, the entire ATM Milan electric bus fleet is entirely made up of Solaris electric buses. The City of Milan led the way in 2018 when it introduced legislation to ban diesel vehicles in the city. ATM Milan has set the goal to have all diesel buses decommissioned by 2030. The city of Milan boasts an extensive internal transport network. The city is an important transportation node in Italy and is one of the country’s biggest hubs for air, rail and road networks.

Interested parties in this latest tender can participate until 7 February 2023.

BasiGo gets over $6M for electric bus roll out in Kenya