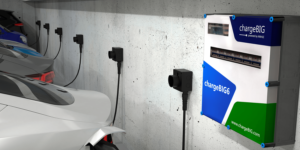 The German automotive supplier Mahle has presented chargeBIG6, a smaller version of its chargeBIG charging system. The new variant is designed to charge up to six electric cars simultaneously, suitable for smaller application areas such as apartment buildings, workshops or small businesses.

The larger charging system called chargeBIG emerged from an internal incubator competition and was designed for charging larger fleets in car parks. The charging points themselves are very simple and cheap, and the all-important control system, including load management (and connection to the building’s energy management system), is housed in a central control cabinet. With its fleet focus, the system is designed for application areas of 18 charging points or more.

For smaller businesses or apartment buildings, a system with 18 charging points is often too large and too expensive. With the new Mahle chargeBIG6, up to six electric vehicles can be charged simultaneously at the existing house connection with 11 kW or 22 kW. The central charging distributor is connected to the existing electricity meter.

The new variant is to take over the simple structure of the familiar system – only with a charging distributor the size of a letterbox instead of a full-fledged control cabinet. It contains all the necessary electronic components, such as a charge controller, RCD, load management and overvoltage protection. Since it meets the IP55 protection class, the charging distributor can also be installed outdoors.

“With chargeBIG6, we have developed an easy-to-install and inexpensive charging system, creating an effective solution for a large market need,” says Sebastian Ewert, founder and CEO of Mahle chargeBIG. “Now even individuals or small businesses can easily electrify their parking lots.”

Earlier this year, the supplier teamed up with Siemens to collaborate on the inductive charging of electric vehicles whereby the two German companies intend to coordinate efforts in harmonisation with the goal of closing gaps to ensure full interoperability between vehicles and the charging infrastructure.

ABB e-mobility closes funding round with over €200 million