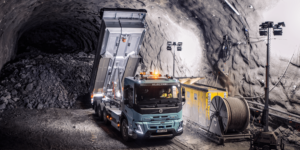 Volvo Trucks is now offering further variants of its FH, FM and FMX heavy-duty electric truck models. Sales of the additional chassis variants will begin immediately, with production in Gothenburg scheduled to start in the first quarter of 2023.

The FH, FM and FMX Electric tractor units have been in series production in Gothenburg since September 2022. The new variants are rigid chassis that can also be equipped with superstructures such as cranes, refuse compactors and concrete mixers.

According to the Swedish company, this should make the use of electric vehicles in urban and regional areas “even easier”. Thanks to several battery, cab and chassis options, the new heavy-duty Solo trucks with the bodies can be designed for a variety of specialised transport tasks, including goods distribution, refuse collection and construction work.

The Solo trucks come with battery capacities ranging from 180 to 540 kWh, depending on the version. This is intended to provide the necessary flexibility for the customer’s particular application, but also to reduce costs and improve sustainability – if more of the large and expensive batteries are installed than necessary.

“These trucks can handle all kinds of transports, from lighter to heavy loads,” says Roger Alm, president of Volvo Trucks. “Customers can choose the exact battery capacity they need for their assignments, and by not carrying more batteries onboard than needed, the payload can increase. In short, we have the optimal and most cost-efficient electric transport solution, no matter what the task is.”

Until now, Volvo Trucks has sourced its battery cells from Samsung SDI. For the FH, FM and FMX electric truck models, the cells from the Korean supplier are assembled into ready-to-install battery packs by Volvo Trucks in Ghent, Belgium. As mentioned, the production of the vehicles themselves takes place in Gothenburg. In August, the Volvo Group announced its intention to build its own battery factory for special commercial vehicle battery cells in the Swedish Mariestad.

Hyliko to use Forsee Power batteries for their hydrogen trucks