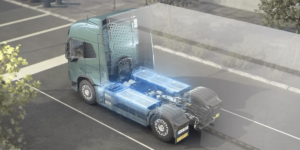 Volvo Group plans to build a battery cell plant in Sweden to mass produce battery packs for its heavy-duty commercial vehicles. Volvo says it has already identified “an ideal location” for the factory.

Mariestad in the Swedish province of Skaraborgs has resulted from “an extensive site localization study”, says Volvo Group. That Mariestad would come out on top has a few reasons: the proximity to Volvo Group’s main powertrain plant in Skövde. The company also expects to benefit from the region’s existing industrial and logistics infrastructure and access to renewable energy. Volvo Group’s R&D centres and headquarters in Gothenburg are only two hours away.

Should all go through, Volvo plans to increase capacity and reach large-scale series production by 2030 gradually. They will design the battery cells specifically for commercial vehicles but have yet to detail production capacities.

“There is a strong demand from our customers already today, and by 2030, it is our ambition that at least 35% of the products we sell are electric,” said Martin Lundstedt, President and CEO of the Volvo Group. “This ramp-up will require large volumes of high-performing batteries, produced using fossil-free energy, and it is a logical next step for us to include battery production in our future industrial footprint,” he said. Lundstedt also mentioned partners but did not disclose who they were.

Although not part of AB Volvo any longer, Geely-owned Volvo Cars is looking to build its battery cells together with Northvolt. They are reportedly planning a joint factory in Gothenburg, Sweden, operational in 2025.

As for Volvo Group, the move follows earlier strategic announcements, e.g. their Volvo Trucks business is setting up a dedicated battery assembly in Belgium, as reported.

“By integrating the battery assembly process in our production flow, we can shorten lead times for our customers and secure high-performing batteries while at the same time increase circularity,” said Roger Alm, president of Volvo Trucks.

Volvo Group says it will start series production in Gothenburg in the coming third quarter of this year.