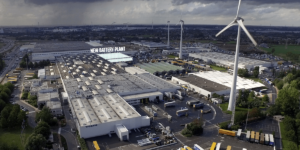 According to the company, each battery pack has a capacity of 90 kWh. Depending on the range and charging capacity requirements, customers can have up to six battery packs (540 kWh) installed in a truck, Volvo Trucks said in a statement. The plant is reportedly 100 per cent powered by renewable energy. The batteries are also designed to be reused later.

“By integrating the battery assembly process in our production flow, we can shorten lead times for our customers and secure high-performing batteries, while at the same time increase circularity,” said Roger Alm, president of Volvo Trucks.

Volvo Trucks’ heavy-duty electric vehicles have recently become available for order. Series production in Gothenburg, Sweden, is scheduled to start in the third quarter of this year.