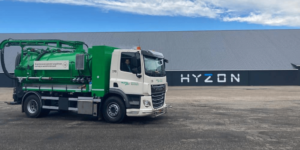 The globally operating US-registered fuel cell truck manufacturer Hyzon Motors is taking full control of its European business. The move was foreshadowed when it became clear that Hyzon was increasingly dissatisfied with the situation with its joint venture partner.

Hyzon is now acquiring the remaining 1,485,000 shares worth 5.52 million euros in the joint venture Hyzon Motors Europe from Holthausen Clean Technology Investments. This means Hyzon will own 100 per cent of the shares in the previous joint venture. The transaction is expected to be completed this year. It is not clear from the company’s announcement who will manage the European business in the future.

Hyzon Motors let its former CEO Craig Knight go in August 2022 and had already indicated at that time that it had identified “operational inefficiencies” at Hyzon Motors Europe. After a relatively long silence from the company that operates in Australasia, the Middle East, USA, China and here in Europe, the company now concludes: “Hyzon’s agreement with Holthausen demonstrates the Company’s commitment to improving its competitive positioning by correcting inefficiencies discovered in the European operations and strategy while adhering to the refreshed long-term growth strategy of the Company.”

“This agreement is a positive step towards realigning our business and improving our market position and value creation opportunities,” said Parker Meeks, President and Interim Chief Executive Officer of Hyzon. “We firmly believe that this acquisition will facilitate those operational improvements essential to a world-class organisation.”

Hyzon opened its European headquarters in Groningen, the Netherlands, in July 2020, in partnership with Holthausen Clean Technology, just months after the company was founded. The European office was not directly operated by Hyzon Motors at its inception but rather had invested in Holthausen Clean Technology, which in turn had founded Hyzon Motors Europe B.V. with this capital. The Dutch company was to build the Hyzon trucks based on DAF’s XF Space Cab tractor. With this joint venture, Hyzon Motors had signed purchase agreements for a total of 20 fuel cell trucks with subsidiaries of Dutch transport companies Jan Bakker and Millenaar & van Schaik, for example. Up to three of the trucks were to be delivered before the end of 2021 and the rest in 2022. Judging by the Jan Bakker website, which prominently features the fuel cell trucks in question, this appears to have happened. In 2021, Hyzon also took large orders from Austria (70 fuel cell trucks) and from the city of Utrecht, which Hyzon should supply with up to 1800 fuel cell vehicles by 2025.

What the two companies have made quite clear is that they will continue to produce zero-emission vehicles on their own steam. Carl Holthausen, Chief Technology Officer of Holthausen explained. “Hyzon’s agreement with Holthausen demonstrates the ongoing commitment from both companies to ensure that each business is well positioned to build a new era of innovation and growth while continuing to meet Europe’s decarbonization objectives. We remain committed to helping the world decarbonize transportation through speciality zero-emission trucks.”

It is not the first change in plans for Europe since Hyzon Craig Knight ceased his capacity as company CEO. The takeover of German conversion specialist Orten, still agreed under Knight in June, was cancelled in October with both companies agreeing instead to cooperate on fuel cell vehicles.

“John Edgley’s appointment extends the technical, organizational, and operational expertise of our European team,” said Hyzon President and interim CEO Parker Meeks. “Under John’s leadership, the Hyzon Australia and New Zealand organization has been built and has successfully brought the Hyzon rigid truck platform forward in conjunction with Hyzon’s global engineering function, embodying our mission for global collaboration across the organization.”

Ebusco has presented an articulated version of the Ebusco 3.0