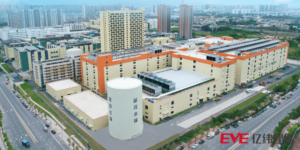 The Chinese battery cell manufacturer Eve Energy, whose customers include BMW, is preparing to build two new production facilities in China with an annual capacity of 20 and 23 gigawatt-hours – the latter will explicitly produce LFP batteries.

The planned 20 GWh factory with an as-yet-unknown lithium battery type is to be built in Jianyang, a city in the southwestern province of Sichuan. According to the Chinese portal Autonews Gasgoo, Eve Energy wants to invest around 10 billion yuan, the equivalent of about 1.36 billion euros, in the battery factory there. The construction of the plant in Jianyang is to be completed within two years. For coordination purposes, the manufacturer is founding a project company in the city with a registered capital of at least 100 million yuan (about 13.6 million euros), the report continues. And: The entire construction is to take place in one phase. The portal cites an official announcement by Eve Energy as its source, the core of which is an intended agreement with the Jianyang government on said project.

According to information from Yicai Global, the 23-GWh factory is to be built in Qujing in the southern Chinese province of Yunnan within 18 months. The investment sum is stated at 5.5 billion yuan, the equivalent of about 748 million euros. The battery type is specified here: According to this, cylindrical lithium iron phosphate batteries are to be produced in Qujing. The construction of the plant is to begin as soon as the still outstanding approval procedures have been completed. Yicai Global bases this information on an official announcement by Eve Energy.

The Chinese battery manufacturer had only recently opened a large research and development centre in Huizhou in the Chinese province of Guangdong. Huizhou is also the company’s headquarters. The Chinese manufacturer became known in our country last year mainly through a contract awarded by BMW: Eve Energy was selected as one of the suppliers for the round cells that the car company will use in its future electric models of the New Class. The other confirmed suppliers are CATL and Envision AESC.

For its current generation of cells, Eve Energy is currently greatly expanding its production capacity in China. In addition to the new factories mentioned above, further plants are planned or under construction in Chengdu, Yuxi and Jingmen. It is not confirmed whether an exclusive plant for BMW is among all these new buildings. According to official information from BMW in September, Eve Energy has been commissioned to build two plants. BMW did not specify at the time whether these were to be built inside or outside China. What is clear is that all suppliers together are to cover the regions of North America, Europe and China locally.

However, due to the strong capacity expansion in China, it is likely that BMW and Eve Energy are planning at least one plant in China. For the sake of completeness, Eve Energy is also associated with the Hungarian city of Debrecen. According to reports from late March 2022, Eve Energy signed a non-binding letter of intent with the local municipality to acquire 45 hectares in an industrial area to build a plant for the production of cylindrical cells. Since then, however, nothing more has been heard of it.

The Chinese battery cell manufacturer Eve Energy, whose customers include BMW, is planning another factory. The new plant in Jingmen in the Chinese province of Hubei will have an annual capacity of 60 gigawatt-hours on an area of 666,700 square metres. Investments of 10.8 billion yuan (1.5 million euros) are flowing into the project.

There is no information yet on the timetable or on the battery cells that are to be produced there. When two more factories were announced about a fortnight ago (see above), it was explicitly confirmed for one plant that it would be for LFP cells. In total, Eve Energy has announced factory projects with a volume of more than 100 GWh within a few weeks.