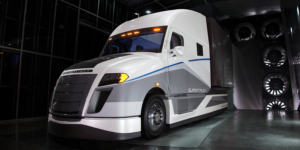 In the USA, researchers at Oregon State University are working with Daimler Truck North America to develop a hydrogen fuel cell-powered heavy-duty truck for regional and long-distance transport. Developed as part of Daimler’s “SuperTruck” project, the tractor is expected to provide ranges of 600 miles (965 kilometres).

The fuel cell electric truck (FCET) is to achieve the 600-mile range without sacrificing payload thanks to new power electronics, engines and energy management tools. The two researchers from Oregon State University, Yue Cao and Alan Fern have received $860,000 for their role in the four-year Daimler SuperTruck project.

The Super Truck project is part of a larger $162 million initiative granted by the US Department of Energy (DOE) to improve efficiency and reduce carbon emissions among cars, trucks, and off-road vehicles. In the latest round of Super Truck funding, the department awarded a total of $127 million to five heavy-vehicle manufacturers. This is the third round since the DOE Office of Energy Efficiency and Renewable Energy launched the initiative in 2009.

The first phases of the project with researchers Cao and Fern from Oregon State University and Daimler Truck include technology modelling, analysis, concept selection and design. In the later phases of this project, a hydrogen fuel cell truck will be built and tested under highway conditions.

Fern said about the project: “It’s exciting to be able to team up with Daimler toward the extremely important goal of lowering emissions without compromising the trucking industry’s ability to perform the vital job of moving consumer goods, industrial supplies and other key items around the country.”

Despite working on hydrogen fuel cell technology since before 2009, Daimler has so far failed to bring a fuel cell commercial vehicle to market, claiming in 2020 that it would first focus on the GenH2 Truck, which is to use liquified hydrogen (LH2). While this enables even higher energy density than fuel cell systems with gaseous hydrogen, it also involves rather complicated technology enabling the low temperature to liquify hydrogen that requires cryogenic tanks. That said, the same year, Daimler Trucks and Volvo Trucks signed a declaration of intent to bundle their fuel cell activities in a joint venture. In June last year, Volvo Trucks presented a fuel cell truck with a 1,000-kilometre range using gaseous hydrogen.

In the statement from Oregon State University, it noted that Daimler’s stated goal is: “to develop an array of technologies to demonstrate an innovative hydrogen fuel cell electric tractor that exceeds heavy-duty long-haul sleeper performance, efficiency and range requirements without compromising payload.” In the statement issued by the university, no mention was made of cryogenic technology which suggests the truck being developed will use gaseous hydrogen, which would also be in line with US national hydrogen infrastructure policy which aims to build hydrogen refuelling infrastructure across the country stemming from major US ports.