Neptun Hopper: The German port town of Rostock may soon see a flotilla of electric ferries, if the idea of Neptun Ship Design (NSD) becomes a reality. Their concept called Neptun Hopper utilises Siemens marine electric propulsion technology. The batteries would be both charged via solar panels on the vessel’s roof and at the docks.
siemens.com

30m dollars for 21 projects looking to accelerate the development and deployment of a new class of power converters have been made available through the DoE’s Advanced Research Projects Agency-Energy (ARPA-E). The innovations are based on wide-bandgap (WBG) semiconductors.
greencarcongress.com

Graphite anode: Cadenza Innovation from the States has teamed up with Australian mineral company Syrah Resources in a long-term research and development agreement to develop graphite anode technology. It shall be used in lithium-ion-based energy storage.
eenewseurope.com

VW to finish small diesel: There will be no more small diesel engines in Volkswagens within 3 – 5 years time, Autocar learnt from Frank Welsch, head of development at VW. He just axed a new diesel engine destined for the 2018 Polo. Instead VW will use petrol-electric mild-hybrid technology, the same goes for the upcoming Golf BlueMotion. At what point diesel will vanish from VW’s line up entirely, depends on the market. Internally, Welsch insisted on a “great future” for the 2.0l diesel.
autocar.co.uk 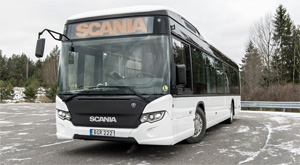 Scania to trial electric buses: Three pure electric buses by Scania will enter a trial by the end of this year. Testing of the Citywide LF buses will commence in Swedish Östersund, where Nettbus is to put them into real service. Another three electric Scania buses may join them by 2019.
scania.com

Tesla made in Shanghai? Lingang at the edge of Shanghai is the most likely place for a Tesla facility on Chinese soil, purports Caixin. The Chinese media group quotes a paper that links the Californian EV maker with three partners in that region. 500,000 EV annually could be build in Lingang. Tesla claims the info to be false but repeated its commitment to China at the same time. So, the bidding for the investment prized at 9bn dollars is to be continued.
caixinglobal.com

Stronger e-bike batteries: German BMZ presented the 3Tron battery for electric bicycles due by 2018. New cell technology is said to hold more power and to lead to a battery life of twelve years. Warranty is given for four years.
pedelec-elektro-fahrrad.de (in German)

Hydrogen from solar: The novel EU project PECSYS looks into cost-effective solar based hydrogen generation. Led by the Helmholtz centre in Berlin, academic and commercial partners from Sweden, Italy and Germany will build demo modules. They aim to keep hydrogen cost below five euros per kilo and to convert more than six percent of the solar energy. The 4 year project has 2.5m euros at its disposal via the EU’s Horizon 2020 scheme.
helmholtz-berlin.de

KERS instead of fuel saving: Torotrak refocused its strategy to strengthen electrification. The V-Charge system will be discontinued as the firm concentrates on its Flybrid flywheel-based kinetic energy recovery system (KERS). The decision is based on talks with OEMs and expected diesel bans.
greencarcongress.com

Fuel cell forklifts operational: Toyota launched the first two of 20 fuel cell forklifts at its Motomachi facility in Japan. The Toyota utility FCV can be recharged within three minutes. A total of 180 hydrogen forklifts shall roam the production site by 2020.
greencarcongress.com

Retrofit hybrid available to all: XL Hybrids upfit system has become available to state and municipal fleets in all 50 states of America via the Massachusetts public fleet contract VEH102. It allows public fleets to order the XL3 Hybrid Electric Drive System at competitive rates.
greencarcongress.com

“BMW will enter the fuel cell market early in the next decade, starting with very small production runs.”

BMW’s head of development Klaus Fröhlich gave only a rough estimate as the when the carmaker will focus on fuel cells. Though it won’t be before 2025, as costs are still too high and there is not enough infrastructure for market penetration.
bmwgroup.com

“The cars we build are about seven years beyond everything I’ve seen before, and it’s quite thrilling and exciting to be here and to be part of this car manufacturing group.”

Peter Hochholdinger, Tesla’s VP of Vehicle Production, is sure to have gotten his former employer to listen up. He had changed from Audi to Tesla a few months ago.
electrek.co

“Hopefully, sales will creep back up, and it’s a shame because the market is not established yet – it probably could have been done with another 12 months.”

Mitsubishi’s UK managing director Lance Bradley says that with the government grant cut in the UK in March and Brexit making it more expensive to import cars, it is becoming more difficult to sell the Outlander PHEV on the Isles.
businesscar.co.uk

“We expect first 150kW standardized chargers to be deployed in 2017.”

CHAdeMO’s Secretary General Dave Yoshida says the Japanese standard is looking to amend its protocol and allow for a 150kW charging. If the market demands, a 350kW version could also be a possibility. The association is currently looking into the feasibility.
chademo.com

“I would talk about an all-around product instead of a bridge technology. A long time will pass before purely electric vehicles have a truly large-scale presence in the market – far beyond the lifespan of our plug-ins.”

“For now, we are Scandinavian, but we have European ambitions.”

Though Mads Harder-Lauridsen, Business Development Director at electric mobility operator Clever, did not give details about those ambitions, he says they are looking to expand further across Europe and are already in talks with several European brands.
chademo.com

“If you ask somebody if they want a larger range the answer is, of course, yes. Then when you move from emotion to facts, and you have a choice between 100 and 200 miles, and the cars with difference prices, the reaction becomes more rational.”

“Going forward we will sell electric drivetrains. We see many smaller manufacturers who cannot afford to develop a plug-in hybrid.”

BMW R&D chief Klaus Froehlich explains that the manufacturer will begin licencing out its technology, as it shifts its focus from hard- to software and as horsepower is becoming less important than the intelligence of a vehicle.
uk.reuters.com

“If you don’t have charging stations everywhere, you cannot have a mass-market product.”

Renault-Nissan CEO Carlos Ghosn says that while the autonomy of electric cars has to increase to appeal to consumers, charging infrastructure needs to be developed further to counter range anxiety.
automotiveit.com

Herbert Diess , Chairman of the Board of Management of the Volkswagen brand, comments on the newly unveiled BUDD-e concept. With a 233 mile range (533 km), it can definitely go the distance.
volkswagen-media-services.com

“A battery electric sports car doesn’t make sense. An electric vehicle relies on your average energy consumption and if you take on a track like the Nurburgring, you are looking at maybe one lap before you have battery degradation.”

Klaus Fröhlich, head of research and development at BMW, does not believe in electric racing cars, saying they will never be greener than a hybrid. In his eyes, the same is true for sports cars…
businessinsider.de

“If a program is going to be put in place, I think there needs to some long-term funding for the incentive program. It doesn’t help if the program is sort of on again and off again.”

Global Automakers of Canada president David Adams criticises the subsidy programme for PHEVs that started in British Columbia in April. The 7.5m dollars earmarked for the programme were to last three years. But 5.6m dollars have already been used up.
news1130.com

“There is a clear trend line that sports cars in the future will be at least partially electrified and the technical systems to do it are already very clear.”

BMW’s board member for development Klaus Fröhlich says that a more powerful version of the BMW i8 might not get a four-cylinder engine as rumoured, but more electric power.
motoring.com.au

“In many cases, when an EV battery has reached the end of its life in an automotive application, only 30 percent or less of its life has been used. This leaves a tremendous amount of life that can be applied to other applications like powering a structure before the battery is recycled.”

Pablo Valencia, GM senior manager of battery lifecycle management, says that the carmaker will make an announcement concerning the secondary use of electric car batteries this week.
hybridcars.com

“Some markets, such as the Netherlands and Norway, have done a good job encouraging electrification, but I don’t see any significant momentum boosting electrified vehicles Europewide.”

Klaus Fröhlich, head of research and development at BMW, says that he is sure that diesel will continue to play a dominant role in Europe.
autonews.com

“We think that we still buy cars. Here’s the reality: If you live in a mega-city, and most of the world is moving to mega-cities, you don’t have anywhere to put the car. Parking is too expensive, insurance is too expensive. When you actually got the car parked, the last thing you want to do is move it, because you won’t find another parking spot.”

“I don’t think a retrofit makes sense. When better batteries are available, we could then offer models with a longer range or with the same range but at a lower price.”

BMW r&d chief Klaus Froehlich and his team have begun brainstorming on the next member of the i-family. Regarding current i3 and i8 owners, however, may have content themselves with what they got, since replacing batteries with more powerful ones is very complex.
autonews.com

“We won’t spend too much effort on the EV markets in Europe or the U.S., because we don’t see them as viable markets in the next 10 years.”

In fact, A123 CEO Jason Forcier does not see EVs as a very viable market in general, apart from maybe China. His company will shift its focus away from Li-ion batteries for the likes of Fisker to concentrate on starter batteries instead.
autonews.com

“We can and we should learn from each other.”

Volkswagen CEO Martin Winterkorn is decidedly against seeing the Silicon Valley, namely Apple and Google, being opposed to the “old world” of automotive companies. He calls for mutual appreciation and cooperation instead.
onvista.de (in German)

“The upcoming 3-series plug-in hybrid will offer almost all of the characteristics of an electric vehicle.”

Board member for R&D at BMW, Klaus Fröhlich, is expecting rising electrification in the company’s vehicles and went on to add that the “fourth generation” of electric power trains is already under development with a fifth at planning stage.
blog.caranddriver.com

“It’s pretty lonely out here which is great.”

Wrightspeed CEO Ian Wright is one of the few that openly enjoys a monopoly position in its market for range extended EV power trains for medium and heavy duty trucks.
breakingenergy.com

“Between launching in China and launching the new Model X, Tesla is reaching a critical make-or-break point.”

Karl Brauer, senior analyst with Kelley Blue Book, sees the Californian carmaker at a critical stage in its development, especially as Tesla is facing difficulties in China.
fortune.com