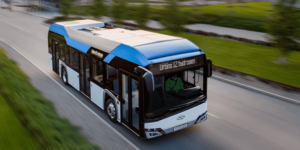 In Spain’s Balearic Islands, Solaris has been awarded a contract by the municipal transport company EMT-Palma to supply five hydrogen-powered Urbino 12 hydrogens to Palma de Mallorca. The contract is worth approximately four million euros.

Lidl is further developing their charging infrastructure. The food discounter has invested 600,000 euros in order to set up 40 charging stations for electric vehicles at 20 locations on the Balearic islands. Fifteen of the stores are on Mallorca. 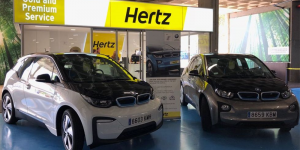 The Balearic government has released a new draft of their law to combat climate change. Compared to the last publication, the requirements have eased up a bit, particularly for rental car operators.

BMW has begun installation of a charging network for EVs that will cover 100 charging points with up to 22kW capacities at 50 locations around the island by the end of the year. So far, one fifth of the stations has been installed.

Perm, Russia, is home to only one Tesla owner, Alexander Shavrin. A regional utility company is helping Shavrin make the commute to work by installing a charger in the 5,000 person town of Achit.
jalopnik.com

Clean growth in Canada: 7bn Canadian dollars (more than 5bn USD) will be invested in green projects that will see carbon emissions go down and bring economic growth. At least, that is what Canada’s liberal government predicts. 62.5m CAD will be invested to install EV charging infrastructure, including hydrogen. Another 132.5m CAD included in the budget are dedicated to clean technology research.
ctvnews.ca, businessgreen.com

Californian charging network: Pacific Gas & Electric together with the Greenlining Institute and other groups intend to install another 7,500 Level 2 charge points and 100 DC chargers in the Golden State. Only the CPUC has to agree but has shown some reluctance in the past.
yubanet.com, centralvalleybusinesstimes.com, greenlining.org (pdf)

Bolloré in Italy: In Turin, Bluetorino has launched and is the French car sharing firm’s latest expansion. Within a year, 250 electric cars by Bolloré shall become available in the Italian city. 150 EV charging stations are planned to be installed along with the EVs.
torinotoday.it, telenord.it (both in Italian)

Clean compensation: The Balearic Islands will impose a tourist tax from this July in a move to finance sustainable tourism. Money made will be used for the installation of EV charging infrastructure among other measures like repair of cycle paths or research in national parks.
tornosnews.gr 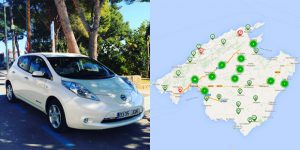 Electric mobility on Mallorca – we put the island to the test.

One would think that Mediterranean islands are a great spot for electric mobility. Reasonable distances and a mild climate are the ideal conditions under which EVs can flourish. Or at least in theory. Real-life experience taught electrive Editor-in-Chief Peter Schwierz otherwise. He finds: isolated applications are never a good idea.

Electric scooter sharing in Berlin: The German capital is about to see a new electric mobility initiative – the eMio free floating scooter sharing. Behind it is the Electric Mobility Concepts UG, a student start-up that aims to set up a cheaper alternative to car sharing and chose Emco scooters with exchangeable batteries to do so. Our editor Carla Westerheide paid eMio a visit and met motivated founders.
Read on electrive.com

Managed Charging 3.0: Researchers from Fraunhofer IOSB have developed a prototype software to show grid operators how many electric vehicles can safely be connected to their local grid. The utilities will thus be enabled to better manage loads.
phys.org

Japan continues its electrification as the Japanese Ministry of Economy, Trade and Industry (METI) just freed another 40 billion yen (334 million dollars) for subsidies in 2015. Three quarters are to go to infrastructure while the rest will be spent on EV grants. Furthermore, in Yokohama 200 new EV charging stations will be erected, starting this July.
meti.go.jp, sankeibiz.jp (Yokohama, in Japanese)

Canadian EV charging networks to connect: The Electric Circuit and the VERnetwork will soon offer total interoperability. Drivers in possession of a card to either network will then be able to access a combined network of 550 charging stations.
newswire.ca, hybridcars.com

Hydrogen superhighway in Oz: Hyundai just brought the ix35 Fuel Cell Down Under and has also opened the first H2 station in Sydney. It is supposed to be the start of a hydrogen superhighway which would connect Melbourne and Sydney via the nation´s capital, Canberra.
carsguide.com.au