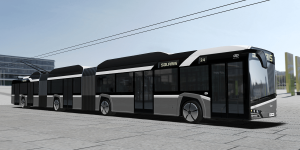 Polish bus maker Solaris has had a record year, selling more vehicles than ever in 2017. The electric segment is one of the factors driving the growth and Solaris says it delivered 2,500 electrified coaches across Europe to date.

The 2,500 vehicles include Solaris all-electric and hybrid buses as well as trolleybuses. Also, the company has three new models cooking, among them articulated models as well as one fuel cell bus.

Last year, Solaris’ Urbino electric models found buyers in France, Germany, Norway, Italy and Lithuania. In its home market in Poland of the 442 buses sold by Solaris in Poland, 48 were fully electric and more orders are in the pipeline. Plus, the Polish government got plans to procure a 1,000 electric buses by 2020. Another open tender is waiting in the city of Wiesbaden in Germany.

The rising share of electric and hybrid buses in sales is a trend both in Poland and in export markets and while Solaris has been active early on, the company wants to build on it further with three new models planned for this year.

“In 2017 we demonstrated the première version of an articulated electric bus of the new generation, the Solaris Urbino 18 electric, as well as the articulated version of the trolleybus Solaris Trollino 18. Both models have already found their first buyers in Poland, Belgium and Slovakia. This year we plan to unveil three new vehicles. The first of these is the new Solaris Trollino 24. It will be a bi-articulated vehicle of 24 metres. (..) The next débuts slated for this year are the new Solaris Urbino 12 with a hydrogen fuel cell as well as the low-entry Solaris Urbino 12 LE, known under the working title “lite” and guaranteeing low operation cost. The premières of these vehicles are scheduled for the second half of the year,” outlines Eng. D. Dariusz Michalak, Deputy CEO of Solaris.

Meanwhile, Solaris has started to extend its reach to India even, where it entered a partnership with JBM Auto for the JBM Solaris Electric Vehicles joint venture.