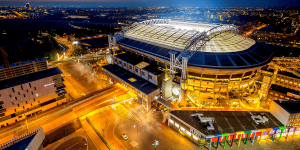 The 3 megawatt storage system provides energy for the stadium, its visitors, neighbours and the Dutch energy grid. It combines Eaton power conversion units and the equivalent of 148 Nissan LEAF batteries.

Other partners include BAM, The Mobility House and the Johan Cruijff ArenA. Funding comes through the Amsterdam Climate and Energy Fund (AKEF) and Interreg.

The system guarantees the arena’s energy supply even during a power outage. In turn, the energy storage balances supply and demand of energy in the Johan Cruijff ArenA and the grid. For example, the system will provide back-up power and provide relief to the energy grid by flattening the peaks that occur during concerts for example.

The storage system with 3 megawatts and 2.8 – megawatts hour is enough to power several thousand households. This capacity also means that the energy produced by the 4,200 solar panels on the roof of the ArenA can be stored and used optimally.

The deal has been in the making since 2016 reportedly. Nissan and Eaton hold a 10-year deal with Amsterdam ArenA to provide back-up power to the Ajax stadium from second-life Leaf batteries.