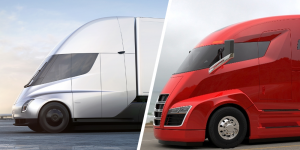 After Nikola Motor had issued a patent infringement claim against Tesla for “substantial” design inspiration, which they came from the Nikola One, Tesla has now received official design patents for the Semi.

Effectively, this means that Tesla’s design has been found not to be stolen from Nikola, and unique enough to merit its own design patents. This definitely does not help Nikola Motor’s case, but the lawsuit is still ongoing.

The Nikola One is a fuel cell truck planned for 2021 by the Utah-based startup. The lawsuit specifically addresses six design patents – one for the windshield, the door, the rump, the fenders, the side panelling and the whole design of the Tesla Semi. Furthermore, Nikola Motors alleges that Tesla attempted to steal their head engineer. The damage done by the alleged patent fraud is estimated at more than 2 billion dollars by Nikola Motor.

Both companies are competing in the field of alternative energy trucks, though Tesla has a head-start of about two years with their Semi. In Spring, Nikola Motor announced that they would refund all down-payments for the Nikola One, without buyers losing their “place” in line when deliveries begin. This was interpreted as a move against Tesla, who requires a down-payment of 20,000 dollars for the Semi.

At the same time, it was also announced that Tesla would be losing another important manager: Justin McAnear, who was responsible for global finance, will be leaving Tesla on the 7th of October for another company. Only recently, head accountant Dave Morton announced his resignation.