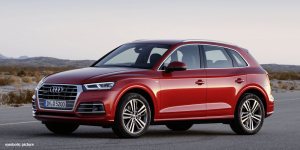 According to media reports, Audi is looking to introduce a new generation of plug-in hybrids next year with 20 to 30 percent more electric range from the current standard. The first model will be a new PHEV version of the Audi Q5 with the new transmission, which is planned for early 2019.

The person behind the report is Siegfried Pint, who is responsible for transmissions at Audi. According to his information, there will also be e-tron variants of the A6 and the Q3, which will join the already released A3 e-tron and the Q7 e-tron. The electric range for these vehicles is currently limited to 50 km, but if we add the expected 30% increase, we calculate the next generation will run an electric range of about 65 km.

The Q5 e-tron has already been sighted during testing in the USA. It will have a 188 kW, 2.0 litre combustion motor of the EA888 type, combined with a 80 kW electric motor and an automated, seven-gear transmission. It looks like the combustion motor will power the front axle, while the rear wheels will draw their power from the electric motor.

Unnamed sources also added that the Q5 e-tron may be revealed before end of the year, which would put it ahead of the expected competition from BMW with the X3 xDrive40e. The first deliveries are expected in early 2019.

The nearing presentation for the Q5 e-tron could put the plug-in hybrids from the Audi workshops back into positive light, as the German manufacturers have been hit with difficult times recently: In June, the company confirmed that the A3 e-tron and the Q7 e-tron had sold out for 2018, and no more orders could be placed for the moment. We expect that the industry change to the WLTP standard likely resulted in production delays in Ingolstadt. Additionally, the Munich state prosecutors office is investigating a suspicion that Audi may have cheated emissions tests with their PHEVs, by placing more load on the batteries than they would in standard situation, and thus lowering emissions readings.