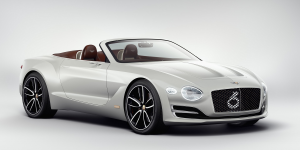 The British manufacturer is considering launching its first fully electric vehicle to help reduce it’s fleet emissions, as it is deemed that PHEVs alone will not suffice. The decision will fall within the year but there is commitment.

Although Bentley has previously considered plug-in hybrid vehicles enough of an answer to reducing their carbon footprint, which is among the highest in the industry due to their heavy sedans and SUVs, the discussion has turned in favour of all-electric cars.

Bentley would likely use the dedicated EV architecture currently under development by Porsche and Audi called PPE (Premium Platform Electric). The firsts vehicles using the PPE platform are expected to launch in 2021, improving acceleration, top speeds and recharging times over the current platform generation.

The final decision whether Bentley will make an electric car will be made within the year but everything points to the British brand moving into e-mobility rather sooner than later. Auto News quotes CEO Adrian Hallmark saying the “target is definitely before 2025”.

The company had presented an all-electric concept in 2017 at the Geneva Motor Show, named the EXP12 Speed 6e. The two-seater is said to have a range above 300 km, using a pair of axle-mounted motors. This model was based on a previous hybrid concept developed by Bentley. The EXP 10 Speed 6 was a two-seater which used a hybrid drivetrain to combined a six cylinder engine with two electric motors.

Overall, Volkswagen considers bringing Bentley closer to Porsche, thus combining two premium brands. Electrification will likely play a larger cost factor in the company’s future, which Bentley hopes to minimise by allying with Porsche for their electrification plans, which is considered “an important issue for Bentley and the brand’s alignment with Porsche as part of the group’s superpremium (sic) business unit could help,” according to VW Group’s finance chief Frank Witter.