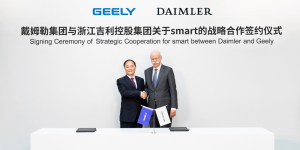 Daimler confirms the latest rumours about the future of its small car brand Smart – so now it is official: Daimler and Geely will establish a joint venture based in China to further develop the Smart brand as a global EV manufacturer.

The joint venture, in which Daimler and Geely each hold a 50 per cent stake, should be established by the end of this year, as yet nothing has been made public about the financial details. Apparently, the next generation of Smart electric models are already being manufactured in a new, purpose-built factory in China, and global sales of these vehicles will begin in 2022.

In an accompanying press release, Daimler announced that it plans to expand Smart’s product portfolio into the high-growth B segment as part of the vehicle development program. Until the market launch of the new models in 2022, the southern German carmaker will continue to produce the current generation of Smart vehicles at the Hambach site in France (EQ fortwo) and at the Novo Mesto site in Slovenia (EQ forfour). European production of the small car will then be phased out. As a kind of compensation, the Hambach plant will, as reported, produce an electric model of the compact class from Mercedes-Benz, for which Mercedes-Benz is investing 500 million euros.

Yesterday the Financial Times reported that Daimler was about to sell half of its small car brand to its Chinese major shareholder, citing three people familiar with the plans. The article went on to say that the official announcement was to take place before the Shanghai Auto Show in April – but it seems that it is all going a lot faster than expected and concrete information was released within 24 hours of the article.

Daimler CEO Dieter Zetsche commented, “For more than 2.2 million customers, smart represents a pioneer in urban mobility. Based on this success story, we look forward to further enhancing the brand with Geely Holding, a strong partner in the electric vehicle segment.” Critics may interpret what Zetsche calls a success story differently because the truth is that Smart is still not in the black after two decades of permanent losses.

Geely-Chairman Li Shufu nevertheless obviously sees great potential in the brand: “This brand has a unique appeal and strong commercial value… As equal partners, we are dedicated to promoting the smart brand globally.”  Geely will contribute expertise in brand management, research and development, production, supplier management and other areas and further develop technologies for the Smart, including connectivity. In concrete terms, the division of labour will be such that the new Smart generation will be designed by Mercedes-Benz, while Geely’s engineers will take care of development. Basically, the Germans primarily contribute brand and concept, the Chinese development and production capacities.

A month ago, the first rumours began to emerge that Daimler could sound out a cooperation with the Chinese manufacturer for Smart successor models. To date, Smart had shared most of the technology with Renault, but the cooperation is on hold. Geely is already undertaking a number of operations with Daimler, early last year, Geely became the largest minority stake shareholder in Daimler.