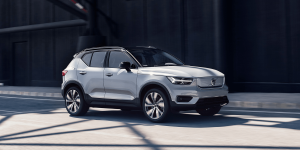 With the XC40 P8 AWD Recharge, Volvo recently introduced its first electric car. Now the Swedes are explaining their new nomenclature – including the other electrified versions.

Until now it was quite simple: The petrol engines were called “T”, the diesel engines “D”, each combined with a number between 2 and 8 to indicate the performance. Plug-in hybrids later received the addition “Twin Engine”, all-wheel drive models the abbreviation “AWD”. A Volvo V60 D3 was therefore a mid-range station wagon with a smaller diesel engine, the XC90 T8 AWD Twin Engine a large SUV with powerful plug-in drive and all-wheel drive.

But in the future it will be a bit more complicated. Volvo had already introduced the name Recharge at the introduction of the electric XC40. In future, all cars that can be charged by cable – i.e. PHEV and BEV – will bear this name suffix. However, the car was officially called XC40 P8 AWD Recharge – four-wheel drive and the marketing name Recharge have been clarified.

Remains the P8 as a distinguishing feature. The P is to stand for “Pure electric” in the future, as Volvo has now explained. And the 8 should indicate the battery size of the car between 70 and 80 kWh. Jonas Engstrom, series manager of the 40s and 60s models, explained to Automotive News Europe that further electric versions of the XC40 could probably be offered. A P6 would therefore have a battery with 50 to 60 kWh – and according to Engstrom, there is also the possibility of assigning a two-digit model designation such as P10. “This is the start of a new nomenclature for describing the capacity of the electric vehicle’s battery,” Engstrom said, “I cannot provide any specifics about the future, but we are open to going above or below [P8].”

The other models are also subject to change: The “T” will no longer stand for petrol engines (Volvo doesn’t want to offer pure combustion engines anyway), but for twin engines – the plug-in hybrids. In addition to the well-known T8 with a system output of 300 kW, the range is to be extended downwards. The V60 already offers a second PHEV (250 kW) in the form of the T6, but a T4 and T5 are also to be added. The lower the number, the lower the system performance – but also the price.

Incidentally, the “D” will be completely omitted in future. The remaining 48-volt mild hybrids will only be called “B” by Volvo because of the “battery”. It won’t matter whether it’s a petrol or diesel engine. In this way Volvo also wants to symbolically reduce its dependence on diesel. According to the report, the diesel share in Europe is around 60 per cent this year, compared with 85 per cent in 2015. Globally, they still account for 35 per cent.

According to Volvo boss Håkan Samuelsson, the P will be the new D: At the presentation of the XC40 Recharge, Samuelsson announced that Volvo wants to achieve half of its sales with electric cars in 2025.