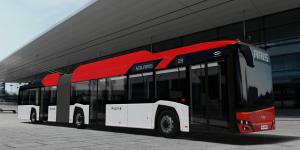 Operation on the only trolleybus line in Bergen is scheduled to start in December 2020. Norway’s second-largest city is the only one in the country to use trolleybuses in its public transport system – making only one of two Nordic countries to do so – the other being Landskrona in Sweden. The trolleybus line in Bergen is just over seven kilometres long, and the buses run between the Strandkaiterminalen port in the city centre and Birkelundstoppen, a little south of the city centre. Solaris has so far delivered two electric vehicles to Bergen, both operating at the local airport.

Solaris has announced in a press release that the order volume concerns eight million euros, i.e. around 800,000 euros per vehicle. The Trollino 18s ordered by Keolis have a 240 kW electric motor and a 55 kWh battery. The buses can also travel up to eleven kilometres without overhead lines.

The buses offer 47 seats, ten of which are easy-access and can be reached without steps. At the second door, a ramp will be installed as a boarding aid for wheelchair users and prams, and two parking spaces with safety straps are also made available. Keolis has also opted for a video surveillance system that not only controls the interior and door areas: A rearview camera and a camera for monitoring the pantograph support the driver. There is also an insulation package specially developed for use in Scandinavia which, according to Solaris, “ensures thermal comfort for passengers and lower energy consumption in strict Scandinavian weather conditions”.

The trolleybus line in Bergen dates back to 1950, since then trolleybuses of various brands have been purchased again and again – most recently at the MAN subsidiary Neoplan in 2003.