According to the CAM study, the Volkswagen Group is the most innovative automobile manufacturer, followed by Daimler and BMW. According to the study, the three German automobile manufacturers account for more than one-third of the total innovation strength of all 38 companies. The study determined the innovative strength on the basis of a total of 2,500 series innovations introduced by the manufacturers. For the evaluation, data from 2016 up to and including the first half of 2019 were cumulated in order to compensate for short-term fluctuations.

The study results show that Volkswagen alone accounts for 460 of the 2,500 innovations. Daimler and BMW are followed by Tesla in fourth place and Hyundai just behind. What is interesting here is that if one considers the earlier innovative strength on the basis of cumulative data from the preceding period (2013 to 2015), the picture is almost identical: the leadership quartet is the same.

The situation is different in the following places: Hyundai (5th, high from 12th), Geely (6th, high from 11th), Tata (7th, high from 8th) and PSA (8th, high from 16th) have all become more innovative. Ford (9th, down from 6th) and GM (10th, down from 5th), on the other hand, have slipped back in the ranking, as have Toyota (12th, down from 9th), Honda (14th, down from 7th) and Nissan (16th, down from 10th). The Japanese automotive industry in particular is losing its innovative strength overall, concludes Stefan Bratzel, head of the study. 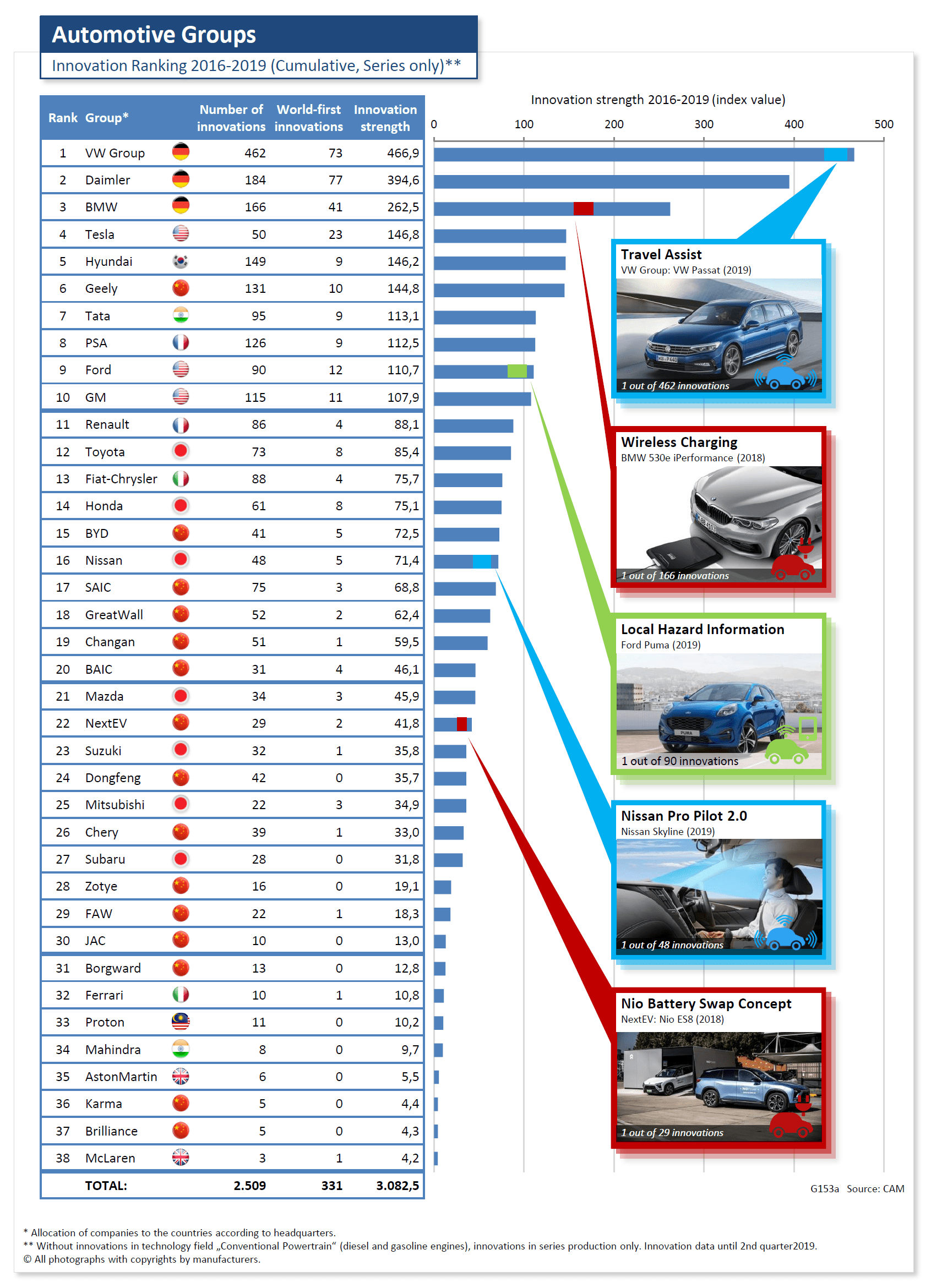 The CAM analysis also concluded that the distances between the top competitors have decreased. The German automobile manufacturers lead in operating and display concepts, connectivity and driver assistance systems as well as plug-in hybrids. On the other hand, the study identifies deficits in the area of battery electric vehicles, “whereby Volkswagen in particular – among others with ID.3 – can rise to the top group next year,” it says.

“The swan song to the German automotive industry is premature”, Bratzel interprets the latest results. The actual technological strengths of Volkswagen, Daimler and BMW are significantly better than is generally perceived by the public. Nevertheless, the industry faces enormous challenges and must arm itself against new competitors such as Tesla and the Big Data players Alphabet, Alibaba or Uber and Didi Chuxing. “In particular, German manufacturers will have to master software, data and mobility services even better in the future if they are not to fall behind in this transformation period. Strategic cooperation will play an increasingly important role in this,” predicts Bratzel.

As far as the methodology of the study is concerned, the CAM is based on the so-called MOBIL approach. Innovations are evaluated not only according to quantitative but also qualitative criteria. Daimler, for example, leads the ranking of world firsts with 77 innovations ahead of Volkswagen (73). However, the Wolfsburg company is far ahead of Daimler in the total number of innovations with 462 (184). The ranking in the Innovation Strength Ranking is a mixture of both values. Incidentally, the technology field “conventional drives” was not included in the results – “due to the irregularities in the wake of the diesel scandal.”

The next Audi Q7 comes with 2 hybrid variants