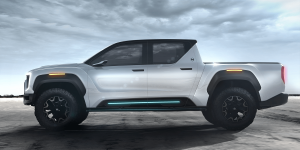 According to Nikola CEO Trevor Milton, the US manufacturer known mainly for its fuel cell and battery trucks is in talks with three car manufacturers for a joint venture to produce its electrically powered pickup truck ‘Badger’.

When Nikola presented the Badger in February in the form of renderings, the company announced that it was seeking a partnership with an OEM for the production. According to Milton, Nikola wants to decide on their choice of partner “in the next few months”.

In the conversation with the news agency Reuters, Milton confirmed the plans that the Badger should be available in both a battery-electric and a hydrogen fuel cell version. The Nikola CEO said that production would start “2022 or earlier”, but did not specify whether the battery or fuel cell version will be built first. This should become clear in two weeks when the company starts accepting advance orders of the electric pick-up truck on 29 June.

Nikola presented renderings and rudimentary technical data for the Badger in February. The fuel cell version is supposed to be equipped with a 160 kWh battery, which should be suitable for a range of 300 miles. Another 300 miles should be possible with the fuel cell (power: 120 kW), the hydrogen tanks hold 8 kilograms. The total range is thus 600 miles (965 km), which is more than the 500 miles Tesla claims for the Cybertruck so far. It is unclear whether Nikola will provide further data on the series version of the Badger in two weeks’ time. According to earlier information, the pickup is to be presented in September at an event called Nikola World 2020.

Milton also confirmed the schedules for the delivery of Nikola’s electrically powered Nikola Tre trucks, which should start production in the second half of 2021. “We are already building prototypes right now on the line in our factory in Ulm, Germany,” Milton said. The Iveco plant in Ulm is to build the Nikola Tre from 2021 as a battery version, and from 2023 also with a fuel cell.

According to Milton, Nikola can build 35,000 trucks per year in Ulm. The construction of an own factory in Arizona is to start this year, the capacity there is also to be 35,000 vehicles.

Since the IPO this June, Nikola share prices have seen an upsurge which has garnered the company considerable attention. The value of the shares initially doubled compared to the issue value, but then fell again slightly. Among others, the share price was cheered by Elon Musk, who said last week that it was time to start serial production of the Tesla Semi – which also propelled Tesla share prices into unprecedented heights. Investors are hoping that the Tesla model will give a big boost to electrically powered trucks generally, which should also benefit Nikola.