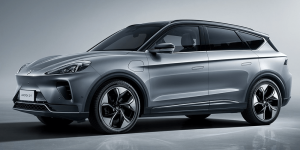 The first series-production electric car from Arcfox, a dedicated EV brand by BAIC BJEV, is now going on sale in China. The Arcfox Alpha-T is a large electric SUV with premium standards and a range of over 650 kilometres.

BAIC BJEV debuted the electric vehicle at the Geneva Motor Show 2019 as a near-series concept vehicle called ECF. The electric SUV that Magna and BAIC are to built will be called Alpha-T as the production model. While very little was known about the car at its presentation in Geneva, the EV subsidiary of BAIC has now published more data.

The Alpha-T follows the same path as some other Chinese electric cars: A large battery, but a relatively small capacity compared to European models. According to Chinese reports, two electric motors have a combined output of just 163 kW, but the battery has a capacity of 93.6 kWh. In the outdated NEDC, this is sufficient for a range of 653 kilometres.

The battery cells will not come from China, but from SK Innovation in South Korea – at least that’s what CarNewsChina writes. However, further details about the cell type, battery construction and charging capacity are not known. Although the vehicle dimensions have been made public (4.78 metres long, 1.94 metres wide, 1.68 metres high and 2.91 metres wheelbase), Arcfox is still reluctant to provide further specifications.

For example, it is reported that the car is to have 5G-capable systems and that the autonomous driving system called ‘Alpha-Pilot’ is to be upgraded to Level 2 and later to Level 3 via software – but all this data is unconfirmed. Pictures from the interior show relatively large touchscreen displays, but there is no further information available.

In China, the model is supposed to start at prices starting at 280,000 yuan, which is the equivalent of 39,600 dollars or 36,400 euros. It remains to be seen whether the subsidy has already been taken into account. The Alpha-T can be ordered in China with immediate effect. The first deliveries are currently planned for August.

The Alpha-T is manufactured by Magna and BJEV in a plant in Zhenjiang province. The capacity of the factory, a former BAIC plant, is 180,000 vehicles per year. It remains to be seen when Arcfox can or wants to reach this level.

Norway: Almost half of all cars sold in April were electric